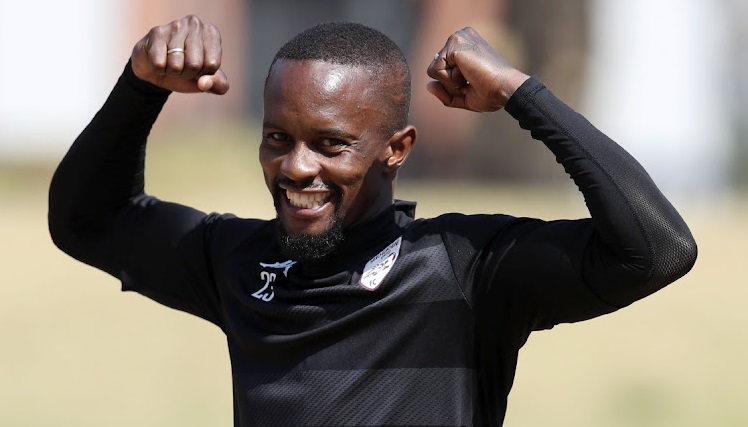 Despite being named Sekhukhune United captain a month after he joined them, Linda Mntambo insists that does not guarantee him a starting berth in the team and he will work hard to earn it.

Mntambo joined Sekhukhune from Orlando Pirates in this transfer window and was immediately named the new captain.

“It is always nice for a player to get game time and as players we feel happy when we are on the field and on my move to Sekhukhune I was not promised that I will get that,” Mntambo told the media during the club media day on Monday.

“I’m here to work. Since the first day I have been putting in the work to make sure that the coach [Kaitano Tembo] notices and recognises my effort to give me game time.

“It’s not as simple as that when you come from a big team like Pirates [that] automatically you will get game time at Sekhukhune, a team that is three years old and still wants to build and grow as a team.

“But I’m here to fight for my place and achieve my target and goals that I set for myself.”

The 33-year-old, who struggled for game time at the Soweto side last season, revealed why the club decided to release him to Sekhukhune despite having a year remaining on his contract.

He said he was called to the office where he was told of Sekhukhune's interest and urged to think about it considering his age and lack of game time.

“The chairman [Irvin Khoza] sat with me and he gave me his blessings, saying I should go and play my football. I’m still playing professional football, it’s not like I’m relegated to the amateur level.

“I know it took a lot of people by surprise with the fact that I still had a year left, but we moved. It is a chapter that I was happy to be part of, a good four seasons at Pirates, be it regular or little game time.

“But I lived my childhood dream and this is the chapter that I have closed and I’ve opened a new one at Babina Noko and I’m here to claim my spot and contribute with the quality that I have.”

Mtambo will lead the club for the first time when they visit Maritzburg United in their DStv Premiership season opener on Saturday at Harry Gwala Stadium.

Bafana Bafana legend Mark Williams hopes the appointment of Benni McCarthy at Manchester United will be the start of African coaching penetrating ...
Sport
2 weeks ago

Kaizer Chiefs’ new forward signing Ashley du Preez displayed the kind of cockiness the club is perhaps looking for as they aim to utilise the ...
Sport
2 weeks ago

SuperSport United coach Gavin Hunt says Bernard Parker still has the same quality, which can help his youthful side as he moves closer to signing a ...
Sport
2 weeks ago
Next Article