'I have put Gugulethu on the map', says Banyana’s Cesane

The celebrations continue here Under the Bridge in Katlehong!!

A golden trophy next to a cake branded with pictures of Banyana Banyana players and Gold medals is what decorated Robert Marawa's studio on Thursday night as he hosted Banyana head coach Desiree Elllis and striker Noxolo Cesane.

The pair were guests on the Marawa Sports Worldwide show which streamed on SowetanLIVE, RiseFM and VumaFM.

Full of smiles and laughter, the pair were animated as they spoke about how they felt about the team’s latest triumph of winning their first Womens’ African Cup Of Nations (Wafcon) title after beating hosts Morocco 2-1 in the final last week.

Ellis said she was grateful for the heroes’ welcome the team received when they landed at OR Tambo Airport on Wednesday.

''It was overwhelming. We have absorbed everything. We have not slept for two days… Otherwise, it has been fantastic. Players have been amazing despite all challenges we faced in camp. When we met the president [Cyril Ramaphosa], it was something else. It was a place of royalty. I have never been there [Union Buildings],’’ said Ellis.

''Before the final, we had a Zoom video call with the president and he told us to bring back the trophy. We brought it back. So when we met the president, it was a goose bump moment. Sitting next to him I felt like a queen,’’ said Ellis.

Ellis said the load shedding crisis in the country inspired them to go to the final and aim to win the tournament.

''I made a comment during the tournament about load shedding. We saw pictures of people sitting under candles and watching the games from their laptops. That really made us push harder and we wanted to bring a smile to their faces,’’ said Ellis. 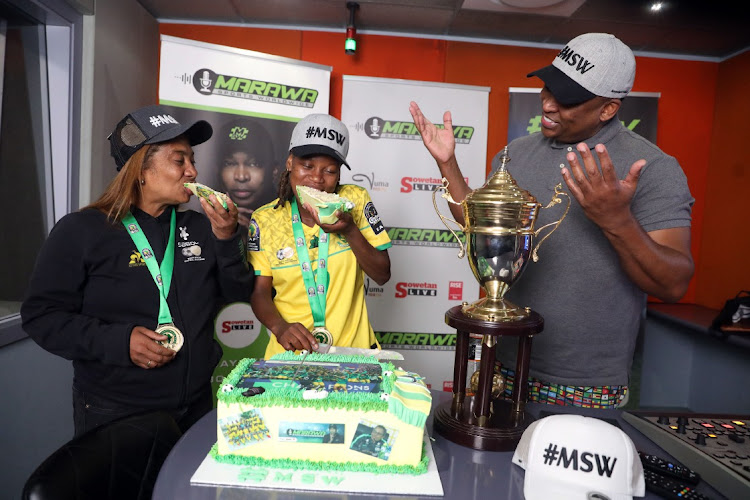 She said the players were not intimidated by the 60,000 capacity crowd in the final.

''When our national anthem played during the final, we were not distracted by the noise in the stadium. I saw some of my colleagues singing from the top of their voices. We knew that we had 60-million people behind us and that crowd was not going to deter us in anyway,’’ she said.

Cesane said her feat with Banyana will encourage the people of Gugulethu in Cape Town, where she comes from.

''It feels like I am still dreaming. I am happy and excited that people can see my performance. My parents and community is proud. The whole of Cape Town, where I come is happy for me. I have put Gugulethu on the map. My friends and teachers are bragging about me,’’ said Cesane.

Banyana Banyana defender Nomvula Kgoale feels bold when wearing her favourite rouge lipstick during a game on the soccer field.
Sport
2 weeks ago

Limpopo government is celebrating with five Banyana Banyana players who hail from the province with a breakfast held at Meropa Casino in Polokwane on ...
Sport
3 weeks ago

Ellis highlighted the importance of having a mental coach in their squad and said it had a positive role on the team’s performance.

''Mental health is important. We should check up on each other a lot. We need help. It was important that we bring in a mental coach. We are coaches. We speak to players. That is all we can do. Sometimes players are not able to open up to us. That is why a mental coach was brought in and they had sessions with the mental coach.’’

Cesane said the sessions got the players to know each other on a personal level.

''At some point I was not comfortable talking about things I was facing and happening in my mind but I enjoyed the sessions. I learned a lot about my teammates and got to understand who they really are. The whole process was so emotional,’’ said Cesane.