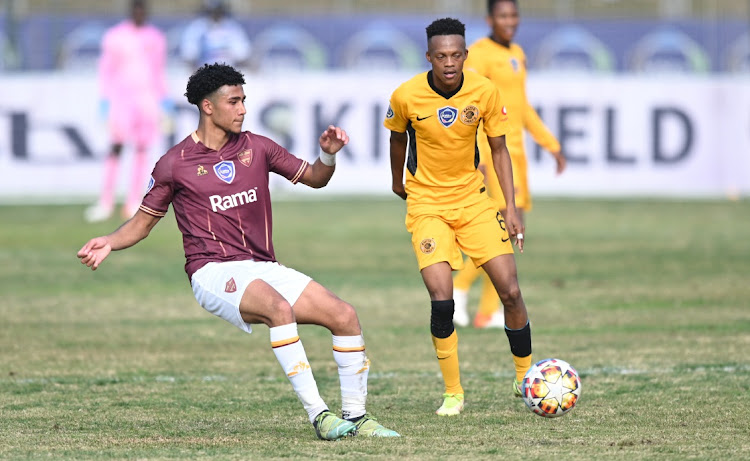 Kyle Jurgens of Stellenbosch FC during the 2022 Diski Shield Final between Kaizer Chiefs and Stellenbosch FC held at Mpumalanga Stadium in Hammarsdale on the 23 July 2022 ©Gerhard Duraan/BackpagePix
Image: BackpagePix

After losing in the DStv Diski Shield final at the weekend, it's not all doom and gloom for the Stellenbosch reserve team as they're looking forward to taking part in the NextGen tournament in the UK this week.

Having won the DStv Diski Challenge last season, Stellies were hoping to add the Diski Shield and cement their status as one of the best reserve teams in SA. However, they fell short in their pursuit of the shield, going down 2-0 to Kaizer Chiefs in the final.

Despite the loss at the weekend, Stellenbosch head coach Evangelos Vellios is proud of the effort his players have put in, calling every game they've played since May a final.

“In fighting for the league last season, every game has been a final. We gave ourselves a chance, [but] it was not meant to be. We'll keep going,” said Vellios.

The side from the Western Cape winelands has already moved on from their loss to the young Amakhosi, as they have landed in the UK for their tour, which comes as a reward for winning the Diski Challenge league title.

“The boys have a lot to look forward to, to showcase their talent against the very best.

“Nottingham Forrest has a great academy and we are looking forward to that,” said Vellios, speaking about the tour.

One player who will look to take advantage of the tour is defender Liam de Kock. The 20-year-old has been rewarded for his good performances from last season with a contract.

On Saturday, he was head and shoulders above the rest, being the standout player in a field that had many bright talents. He commanded the defence well, was good in the air, great with interceptions on the floor and was able to progress the team offensively with good line-breaking passes.

“Liam is a tremendous footballer, he must just keep going and keep working hard and the doors will open for him,” said Vellios.

“The next step that he needed to do was to get a PSL contract, which he has. Now it's up to him to show [first-team] coach Steve [Barker] that he's ready to play. I'm very proud of him.”

SuperSport United recruit Ricardo Goss is happy that head coach Gavin Hunt sought him out when looking for a replacement for the departed Ronwen ...
Sport
2 weeks ago

By taking the Chippa United head coach job for the upcoming DStv Premiership season, Danie Klate's introduction to top-flight coaching can be ...
Sport
2 weeks ago

Banyana Banyana Africa Women's Cup of  Nations (Wafcon) final trump-card Hildah Magaia has narrated how she benefited from the fact that her strike ...
Sport
2 weeks ago
Next Article