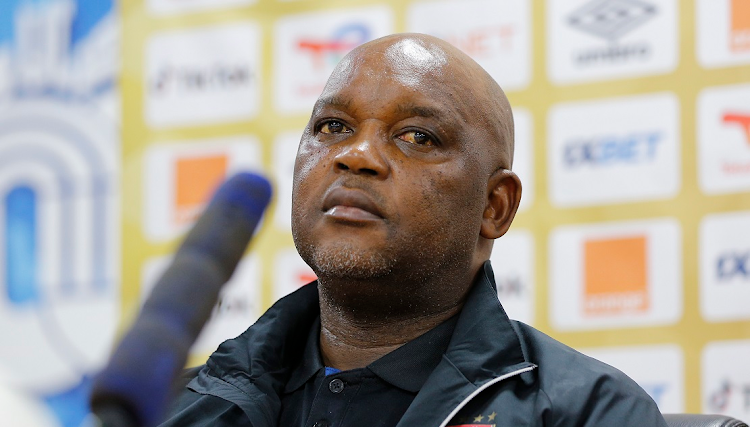 Former Al Ahly coach Pitso Mosimane was not among the shortlist for Caf Coach of the Year.
Image: Ladjal Jafaar/BackpagePix

Don't have time to read? Listen to a summary below, provided by the writer.

Former Al Ahly and Mamelodi Sundowns coach Pitso Mosimane has reacted to outrage over him being “snubbed” for Caf Coach of the Year.

Despite taking Al Ahly to their third Caf Champions League in three season and finishing third at the Fifa Club World Cup, Mosimane was not included on the final shortlist for the prestigious award.

Instead the award will be contested by Aliou Cisse (Senegal), Carlos Queiroz (Egypt), and Walid Regragui (Wydad Athletic Club). Al Ahly did score a nomination for Club of the Year.

Responding to one fan's complaint about Mosimane not being on the list, the SA-born coach sarcastically claimed it was a lesson for him to “do better”.

“Honestly, I should do better. I can’t expect to be bronze (Fifa Club World Cup), silver (CAF CL) medallist and win. But my daughter already gave me an award for winning the same Fifa bronze & CAF Super Cup and Champions League (2x in a row, nogal) in the absence of Caf awards,” he said.

He said he was not fazed by his exclusion, as long as Banyana Banyana coach Desiree Ellis is given her flowers.

As long Desiree Ellis collects her Award, she represents all of us in SA.🇿🇦

Mosimane was also snubbed for the Best Fifa Men’s Coach award earlier this year, despite his numerous achievements.

He reacted to that exclusion by claiming he had “given up” on Europe.

“Unfortunately, we are from the wrong continent. [I] have given up on Europe,

“If Sadio Mane, Mohamed Salah, and so on can win the Uefa Champions League, Premier League and Fifa Club World Cup and still not win any world or European awards, who are we? Samuel Etoo and Raheem Sterling objected and voiced out, but who cares?”

He told the New York Times Africa was not the only continent that was overlooked.

“It is as though it does not mean as much when you win in the competitions that do not generate the most money, that do not have the biggest audiences,” he said.

He vowed to continue “changing the game”.

Orlando Pirates have launched their slick new jersey for the 2022-23 season, though the price of R1099 has already set some tongues wagging.
Sport
2 weeks ago

Cavin Johnson is pleased that his former player Kobamelo Kodisang remained in Europe as he feels it was vital for his growth.
Sport
2 weeks ago

New Sekhukhune United striker Victor Letsoalo predicts a challenging season for him with the club as he wants to try and translate the performance he ...
Sport
2 weeks ago

While Royal AM are expected to unveil Happy Jele and Luvuyo Memela as their new signings tomorrow, they are also set to decide the future of their ...
Sport
2 weeks ago
Next Article