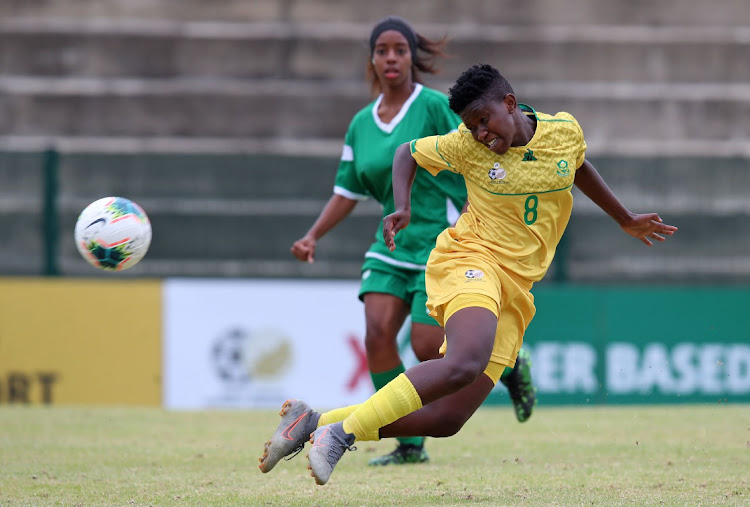 Almost every position in the Banyana Banyana XI has someone who's made it her own, but at left-back the competition has always been tight between two musketeers — Sibulele Holweni and Karabo Dhlamini.

Holweni, 21, is a year older than the Tembisa-born Dhlamini. The pair are blessed with almost identical tributes. Holweni and Dhlamini are modern-day full-backs/wing-backs who can also operate as wide midfielders due to their tactical intelligence, crossing abilities and versatility.

Holweni, who missed the 1-0 win over Zambia in the semifinals in Casablanca on Monday due to a knee injury, is expected to be fit for the decider but it's still somewhat difficult to predict if she'll start ahead of Dhlamini, given the fact that the 21-year-old Mamelodi Sundowns Ladies star hold her own against Zambia.

Holweni and Dhlamini are close friends, having met as kids in high school. Dhlamini has insisted whoever starts between her and Holweni on Saturday will do the job. The duo's bond was strengthened at junior national teams.

Holweni and Dhlamini were the skipper and the vice at Under-17 and Under-20 national sides, respectively. They both represented SA at the U-17 World Cup in Uruguay in 2018. “It's not important who starts the final between me and Msawawa [Holweni].

“Whoever starts between us will deliver, that's for sure,” Dhlamini told SowetanLIVE in Rabat on Wednesday.

“We were at the same boarding school, Tuks Sports High School, that's where we became friends. We played together at the U-17 national team and we graduated together to the U-20. At both U-17 and U-20, she [Holweni] was the skipper and I was her deputy. We have a very strong relationship. We always support each other. If she plays, I support her and she does the same.”

Holweni started Banyana's first Wafcon fixture, the 2-1 win over Nigeria, where Dhlamini wasn't even on the bench. Dhlamini returned to the XI in the 3-1 win over Burundi, the second tie of the tournament, with Holweni only coming a few minutes after the hour mark to operate as a winger, replacing Thembi Kgatlana. In the third outing, the 1-0 victory over Botswana, they both started.

Dhlamini started at left-back while Holweni played as a winger. Against Tunisia in the quarterfinals, Holweni got the nod but a knee injury forced her off at the start of the second stanza, where Dhlamini took her slot.

• Ndebele is in Morocco as a guest of Sasol, Banyana sponsor

Women’s Africa Cup of Nations finalists Banyana Banyana will be bitterly disappointed not to have a player among the three finalists for Player of ...
Sport
4 weeks ago

Former Banyana Banyana captain Portia Modise says the football federations of the four African teams that have qualified for the Fifa Women's World ...
Sport
4 weeks ago

Banyana a match away from pocketing R400k each

By reaching the Africa Women’s Cup of Nations (Wafcon) final, Banyana Banyana players are already guaranteed R55,000 each in bonuses and for some, ...
Sport
4 weeks ago
Next Article