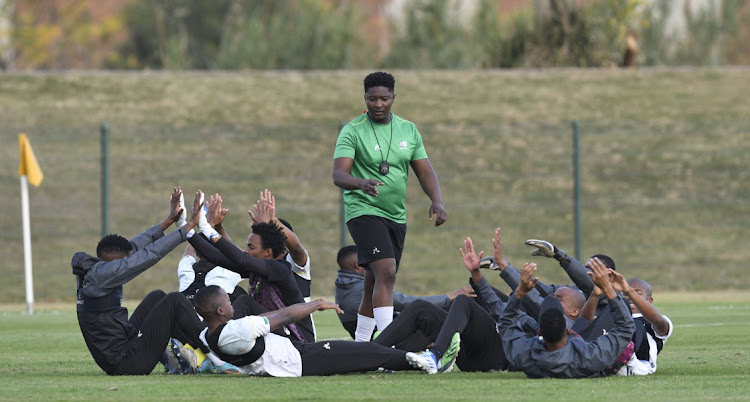 As Bafana Bafana start defence of the Cosafa Cup title against Mozambique today at Princess Magogo Stadium (5pm), coach Helman Mkhalele says they are feeling the pressure to win the tournament again.

Despite leading a youthful and inexperienced side in the tournament, Mkhalele is aware of the expectations and promises they will go all out to try and defend the title they won in Gqeberha last year.

“As hosts, we are under pressure to perform, so we will try by all means to go all the way and reach the final, even though we are aware of the challenges that will be posed by other teams,” Mkhalele told the media ahead of the match.

“The threats that Mozambique are bringing are physicality and speed, and we will try to counter that. They are a good side in terms of tactical approach. They are a team that likes to press high and also stay compact in defence. So in all our preparations we have been focusing on that.”

Bafana will be without midfielder Ethan Brooks, who has been ruled out with a minor knee injury. But Mkhalele is hopeful he will recover in time for the semifinal should they progress today.

“The preparations went well, even though we had challenges related to some of the injuries we have had in our preparation,” he said.

“I’m happy to announce the whole squad is back except Brooks. We hope that in the next game, after Mozambique, he will be ready.”

Mkhalele also expects a tough match from Mozambique as he feels they will look to avenge the defeat they suffered in the semifinal of this competition last year.

“Coming to Mozambique, I will say it will be a tough game because of their competitiveness and they are a physical team, so we need to make sure that we overcome that challenge.

“But again, what will make this match interesting is that they will be coming for revenge because we beat them in the semifinals last year, so they will try their best to go out there and try to reverse the score and go to the next stage.”

Zambia and Namibia through to Cosafa Cup semifinals

Zambia and Namibia are through to the Cosafa Cup semifinals after they knocked out Botswana and Madagascar respectively in their quarterfinals at ...
Sport
4 weeks ago

Banyana rocked by Covid-19 outbreak ahead of quarterfinal against Tunisia

Banyana Banyana have been rocked by a number Covid-19 cases ahead of their crucial Women's Africa Cup of Nations (Wafcon) quarterfinal against ...
Sport
4 weeks ago

Former Orlando Pirates defender Siyabonga Sangweni believes being given too many responsibilities too early is one of the reasons Thulani Hlatshwayo ...
Sport
4 weeks ago

The midfielder is suffering a knee injury, but SA are hoping he will recover in time for the semifinals.
Sport
4 weeks ago

Mamelodi Sundowns have continued to bolster their side for their forthcoming campaign with the recruitment of highly-regarded Moroccan central ...
Sport
4 weeks ago
Next Article