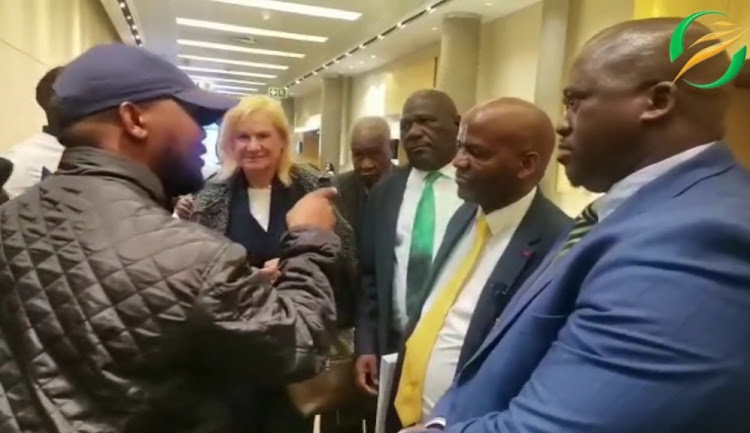 A screenshot of a video of journalists and SA Football Association national executive committee members in heated discussion after a press conference descended into chaos at Sandton Convention Centre in Johannesburg on June 24 2022.
Image: Screenshot/Twitter

SA Football Association (Safa) president Danny Jordaan and CEO Tebogo Motlanthe have apologised for the rants against and manhandling of the media that took place after a press conference on Friday.

The SA Football Journalists Association (Safja) has condemned the incident and “called it out with the contempt that it deserves”.

The incident started inside the press conference after a Safa congress at the Sandton Convention Centre on Friday ahead of Saturday’s elective congress at the same venue, when national executive committee (NEC) members ranted at the media over criticism of Jordaan.

In a statement Safa said: “Dr Jordaan and Adv Motlanthe offered their unconditional apology to eNCA journalist Hloni Mtimkulu after she was impeded from doing her job as she filmed a heated exchange between an NEC member and other members of the media.

The SAFA Briefing ahead of the organisation's elective congress ended in controversy as delegates were leaving the Sandton venue. eNCA's @HloniMtimkulu had to fend off a SAFA official as she tried to do her job in filming a disagreement between two other officials. #DStv403 #eNCA pic.twitter.com/t6tHO24zOB

“They also offered their apology to other members of the media who had a spat with Safa members.”

Safa’s apology made no mention of the rant against the media inside the press conference room by NEC member Tankiso Modipa.

Jordaan, who was re-elected president on Saturday, said he had always stood for press freedom.

“We had a press conference and we had an incident there which we condemn totally. I think it is the first time in my long memory of football and we do not want it to happen again.”

Safa presser ahead of the association's eagerly awaited elective congress got heated and had to come to abrupt end after some Safa members attacked media for asking questions to president Danny Jordaan, who is vying for third term. @SkepeMatsebane pic.twitter.com/ufc1xNlz0f

Motlanthe said Safa always had an open-door policy towards the media.

“I want to again say we apologise for what happened yesterday. We have spoken to the members concerned and we apologise on their behalf.”

Safja “noted with concern the visuals emerging from the Safa congress media briefing”.

“While we accept that disagreements between media and the governing body will arise from time to time, we take exception to those placed in custody of the beautiful game preventing journalists from doing their work, and call it out with the contempt is deserves.

The SAFA presser descended into chaos after an NEC member started to verbally attack journalists that attended the presser. #SAFAElections #SABCSportFootball

“Our members Kgomotso Mokoena, Mmasekepe Matsebane and Themba Tshabalala are seen in the video pleading with Safa NEC members to give them space to be impartial in their reporting while Safja secretary-general Hloni Mtimkulu was manhandled — disturbing images have been broadcast on eNCA and social media.

“It is part of this country's hard-fought democracy that officials of public institutions are held accountable, and prohibiting the media from doing this in a responsible manner betrays this.

“Jordaan also cut short the briefing to attend to another engagement. Safa on Friday called journalists to an impromptu press conference, but then its NEC members took over proceedings, answering questions on behalf of the incumbent.”

Rants against the media as Safa press conference descends into chaos

Attendees feeling compelled to answer questions not directed at them was the main reason an SA Football Association (Safa) press conference turned ...
Sport
1 month ago

Friday’s briefing took place in the same room where the congress was held, where many NEC members were still seated at their desks.

Asked about when he decided he needed a third term to fulfil his plans for SA football, Jordaan responded he did not make the decision but was nominated.

He then invited NEC members, who were not at the front desk and officially part of the briefing, to comment.

Modipa ranted that: “It’s always unfair for you as the media to ask questions that are direct and personal to our president. It’s our president — we decide. You are not even in football, you are just a journalist, you must deal with the journalists.”