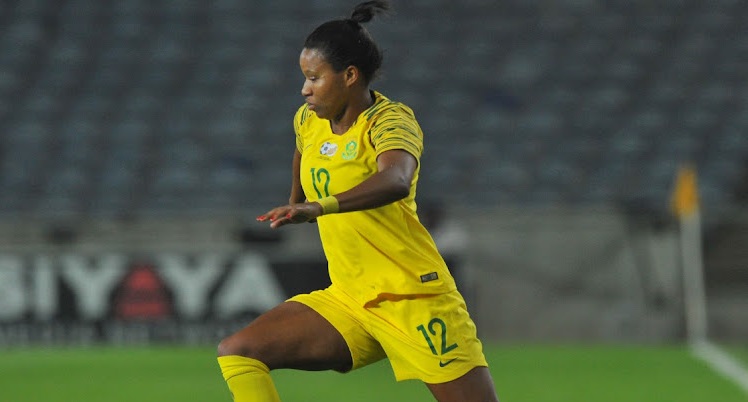 Jermaine Seoposenwe of Banyana Banyana has not featured for the team in two years.
Image: Sydney Mahlangu

Banyana Banyana star Jermaine Seoposenwe has addressed the rumours that she had a fallout with coach Desiree Ellis hence she's not featured for the side in two years.

Seoposenwe's two-year absence in Banyana came to an end when she received a call-up for the upcoming Africa Women's Cup of Nations (Awcon), to be hosted by Morocco from July 2 until July 23.

The 28-year-old winger-cum-striker made the final squad of the competition, where SA is in Group C alongside defending champions Nigeria and two debutants in Botswana and Burundi.

Seoposenwe has insisted she and Ellis have never been at loggerheads, dismissing the notion that her absence had to do with the alleged fallout with the coach. The star from Cape Town said visa issues hindered her from coming to play for Banyana in the last two years.

"There's been a lot of speculation why I wasn't part of the team, but the only reason I wasn't able to come was that I had visa issues. It was a challenge to sort out my visa in Portugal when the Covid-19 was at its height. I am excited to be back. During my absence I was talking to coach Desiree extensively, so there were no issues there,'' stated Seoposenwe.

Seoposenwe also confirmed she'll leave her Portuguese side Braga when her contract expires at the end of this month, having joined them in 2020. The Banyana ace wasn't keen to open about about her future plans as far as club football is concerned, highlighting her focus was on Awcon.

"Yes, I am leaving Braga. It's been a great experience for me there. I am concentrated on helping Banyana win Awcon. Other things will be dealt with later,'' said Seoposenwe, who helped Braga clinch the Portuguese Cup in March.

Banyana, the runners-up of the last edition in Ghana in 2018, are already in Morocco. They'll be based in Rabat. Ellis' charges kick-off their tournament by facing Nigeria with many dubbing that game "a final before the final" on July 4. Banyana face Burundi three days later, before wrapping up their group phase journey against neighbours Botswana on July 10.

The SA Football Association (Safa) has dangled a R9.2m carrot in front of Banyana Banyana if they win the upcoming Africa Women's Cup of Nations ...
Sport
1 month ago

Ellis picks Banyana players with many skills for Awcon

Versatility was the main attribute Banyana Banyana coach Desiree Ellis used when she selected the final squad for the upcoming Africa Women’s Cup of ...
Sport
1 month ago

Banyana Banyana coach Desiree Ellis is thrilled to have the streetwise Jermaine Seoposenwe back as SA put final touches to their mission to conquer ...
Sport
1 month ago

Banyana Banyana coach Desiree Ellis has named a strong 26-member squad for next month's 2023 CAF Women’s Africa Cup of Nations (Awcon) to be hosted ...
Sport
1 month ago
Next Article