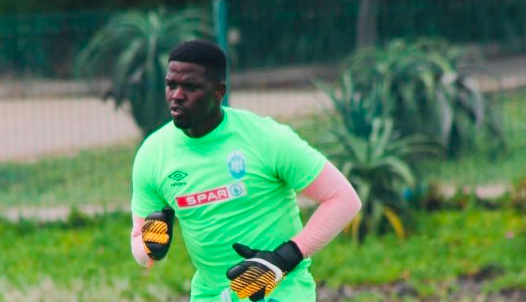 Former AmaZulu goalkeeper Siya Mbatha has slammed rumours doing the rounds on social media that he has turned to prostitution in Durban.
Image: AmaZulu/Twitter

Former AmaZulu goalkeeper Siya Mbatha has slammed rumours doing the rounds on social media that he has turned to prostitution in Durban.

Rumours linking Mbatha to sex work made news this week and saw his name top the Twitter trends lists.

Speaking to KickOff, Mbatha said the rumours were false and “rather disturbing”.

He said people were using his name to seek relevance and attention.

“This was done on purpose to implicate and spoil my name, but this is bad. We honestly can’t be going to such extremes just for the sake of trying to score sales or clicks at the expense of people’s careers,” he said.

He said he was now dealing with DMs of people asking him about the rumours.

“Now I must deal with DMs of people asking me for things that cannot be printed because they associate with such as some websites have gone as far as using my picture since I’m the Siya Mbatha they know.

“I have a child who is going to school and do these guys realise the kind of consequences this could have if another child says some mean things to him because of what he read. Kids are mean,” said Mbatha.

Last year, the Gqeberha high court sentenced a serial rapist who pretended to be a famous soccer player on Facebook to six terms of life imprisonment,

TimesLIVE reported Thembenkosi Ngcolomba, 44, pretended to be a famous soccer player and lured nine women, aged between 15 and 31, to an open field where he raped and robbed them of cellphones and cash.

“He profiled himself on Facebook as a famous local soccer star and, after gaining the attention of the victims, arranged for them to meet him in NU 29 in Motherwell, the area in which he resides,” said police spokesperson Col Priscilla Naidu.

Naidu said when Ngcolomba met his victims, he told them he was the player's uncle and the soccer star was busy, so he was sent to fetch them.

“While walking, he would produce a screwdriver or a knife, threaten them and rape them in an open field between NU 13 and NU 29,” she said.

“His demeaning actions ended in 2018 when, like a fish, he took the bait two days after raping his last victim.”

Eight people who took care of soccer legend Diego Maradona will be tried in Argentina courts for homicide, according to a ruling released on ...
Sport
4 days ago

WATCH | Kaizer Chiefs' new-look squad gets down to training

Kaizer Chiefs' new-look squad have begun training in earnest at the club's headquarters at the Chiefs Village in Naturena.
Sport
4 days ago

Cape Town City midfielder Mduduzi Mdantsane says the family-like environment at the club helped him blossom as he was an integral part of the team's ...
Sport
4 days ago

Banyana Banyana star Jermaine Seoposenwe has addressed the rumours that she had a fallout with coach Desiree Ellis hence she's not featured for the ...
Sport
4 days ago
Next Article