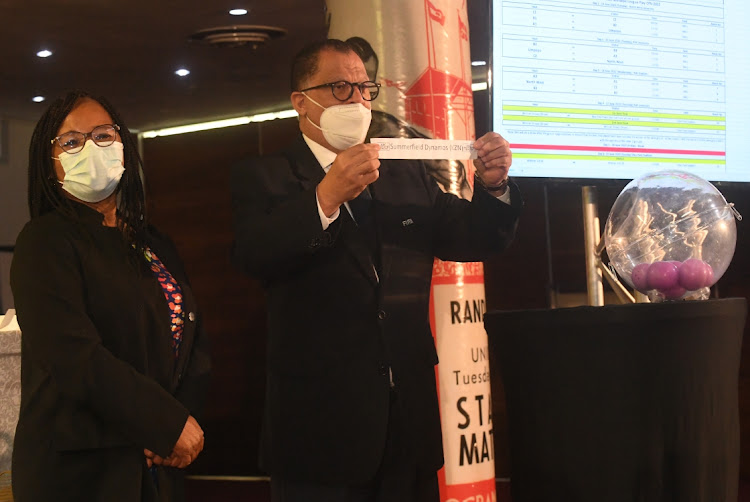 Dr Rejoice Simelane of the Motsepe Foundation and Danny Jordaan (President of SAFA) during the ABC Motsepe National playoffs draw at SAFA House on June 06, 2022 in Johannesburg.
Image: Sydney Seshibedi

Safa president Danny Jordaan says the ABC Motsepe League has spurred football development in the country, hitting out at critics who say there has been no progress football-wise in SA.

Jordaan was speaking during the draw for the Motsepe League finals held yesterday at Safa House. This year’s playoffs will be in Potchefstroom from June 13 to 19, with the teams that make the final guaranteed promotion to the GladAfrica Championship. The winners of the tournament will receive R1m while the runners-up will get R600,000.

Safa also announced that the players that will be on show in North West are up for national team selection as they will be used in the African Nations Championship (CHAN) qualifiers.

Nine winners from the provincial leagues will be competing, with six provinces having  their representatives confirmed: MM Platinum (Gauteng), Bayern (Mpumalanga), Dikwena United (Free State), Spear of the Nation (Eastern Cape), Zizwe United (Western Cape), and Summerfield Dynamos (KwaZulu-Natal). Limpopo, Northern Cape and North West are yet to confirm their winners as they have outstanding arbitration cases.

Jordaan applauded the teams that made it to the national finals, saying this was evidence that there’s development and structure in SA football.

“If you look at the PSL now, there are teams from the rural areas. Football has become national in the character of our competitions, from PSL, NFD, and Motsepe League. Part of that is the work being done by the regions and provinces.

“Anyone who thinks there are no structures and development in football, I don’t know where they’re looking. The same applies for the women,” he said.

Safa CEO Tebogo Motlanthe has insisted that the organisation is ready for the playoffs and that the outstanding cases will be finalised before Friday.

“We are ready for the playoffs, of course. We have three provinces that have outstanding judicial matters. Those matters should be done by Friday.

“I know the arbitrations of Limpopo are taking place on Wednesday. We are ready. When the tournament kicks off we'll be having all the teams,” said Motlanthe.

Group A: Northern Cape; Limpopo; Spear of the Nation (EC).

Daniels awaits explanation from Kadodia after his release

Despite being released by Maritzburg United last week, defender Clayton Daniels is demanding clarity from chair Farook Kadodia after he was told his ...
Sport
2 months ago

Being 'coachable' helped Maema settle in quickly at Sundowns

Mamelodi Sundowns attacking midfielder Neo Maema is impressed by how quickly he has adapted to life at Chloorkop in his first season.
Sport
2 months ago

Ledwaba gets thumbs-up to take on Jordaan

There were no major surprises when the SA Football Association (Safa) yesterday confirmed the names of candidates cleared to challenge incumbent ...
Sport
2 months ago

After an injury-riddled season in which he featured in a measly 17 of 47 games in all competitions for his club Orlando Pirates, utility left-back ...
Sport
2 months ago
Next Article