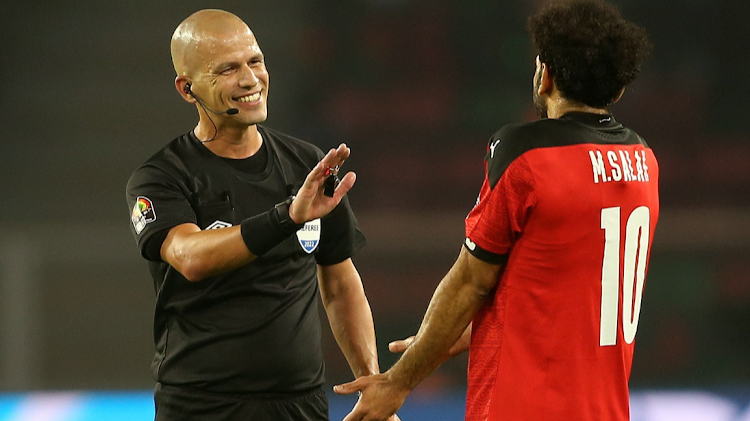 Gomes, 39, spoke to SowetanLIVE's sister publication TimesLIVE before jetting out of SA on Friday to handle the final at Stade Mohammed V in Casablanca, Morocco (8pm Morocco time, 9pm in SA), where he will renew a rivalry and friendship with Ahly’s ex-Mamelodi Sundowns coach Pitso Mosimane.

Gomes’s biggest game he blew was this year's Africa Cup of Nations final, in which Sadio Mane’s Senegal beat the Egypt of Liverpool teammate Mohamed Salah on penalties in Yaounde, Cameroon, in February.

Ahly are looking to win a third successive Champions League title, a record that would stand alongside that of Mosimane becoming the first coach to win three in a row. Ahly had protested about playing the final in Wydad’s back yard but their case was dismissed by the Court of Arbitration for Sports early last week.

Gomes was chosen by Fifa to be among the six African referees to handle matches at the World Cup in Qatar in November and December.

“I think every referee has these opportunities and it’s about what you make of them,” he said of his successful career. “I have a responsibility to my country, to my family and to my colleagues to go and raise the flag.

Just finished watching the Wydad vs A Petro Luyanda. The manner at which he managed the game,players,and the dugouts.Just like he managed Senegal vs Egypt.
Can we give him the honour of Ikhamanga? Please include Zakhele Siwela.

“When you sacrifice so much it’s important that you bring results. I’m a businessman and if I don’t bring a good return on investment then I’m wasting my time. Refereeing is something I’m very passionate about and it’s been my life.

“It’s a life-long career – I mean, I’ve stuck by my guns. I’ve got my style and some people don’t like my style and some appreciate it, but I stand by what I believe is right and I leave the rest for the world to see.”

After learning of Gomes’s appointment for the final, Mosimane, who used to have notoriousl clashes with the referee as coach of Downs, congratulated the official and said he deserves one of the highest orders in SA government, the Order of Ikhamanga.

Gomez said he appreciates the compliment, but did not see it because he is not on social media as he feels it may distract him from his job.

“I always say I respect all the coaches and he [Mosimane] is not the only one to praise me. There are so many people who help me to improve my game.

“I don’t read too much into that [Mosimane’s flattery], I don’t even have a Twitter account because these are just the opinions of people and some people also try to push agendas.

Gomes said he’s still looking to achieve more in a career that has already reached heights many of his colleagues could only dream of.

“I’m still a young boy - I’m 39 years old and only God knows how long I can keep going. There’s an age limit of 45 but they remove that age limit provided you can still pass the fitness tests. But you need to look at yourself in the mirror and say you’ve done enough and give a chance to somebody else.”

Rwandan referee Salima Mukansanga, who officiated at the Fifa Women’s World Cup in France in 2019, will be part of the African World Cup referee contingent.

Mosimane on Al Ahly: 'If you think I had pressure at Sundowns‚ no my friend‚ I have pressure here'

Al Ahly coach Pitso Mosimane has said he would not have taken the job had he not expected criticism and pressure‚ in response to some former players’ ...
Sport
1 year ago

“It’s fantastic to have our sister Salima. She will be with us and it’s a first World Cup where the women will participate,” Gomes said. “We had that already at the [Tokyo] Olympics. It’s now becoming the norm and the women are doing very well and keeping us men on our toes.”

Gomes will be assisted by Zakhele Siwela of SA and Souru Phatsoane in Monday's final. The same officials will work with Gomes in Qatar.

“It’s very important to be with the same team all the time. Just from my body language they understand what I’m going to do and they know what I need and they know my weak and strong points.”

Having VAR (video assistant referee) in African football is something Gomes appreciates and he encourages the public to understand that it is there to assist the officials in making the correct decisions when there’s doubt about the calls they make.

“I think the public are not well informed and they don’t understand the principle of VAR, or exactly what it’s used for. I think education needs to be given so that people understand that it’s to their benefit. I don’t see anything negative about VAR. I think that’s what people who love football want. Sometimes it’s the application that some people don’t understand.”