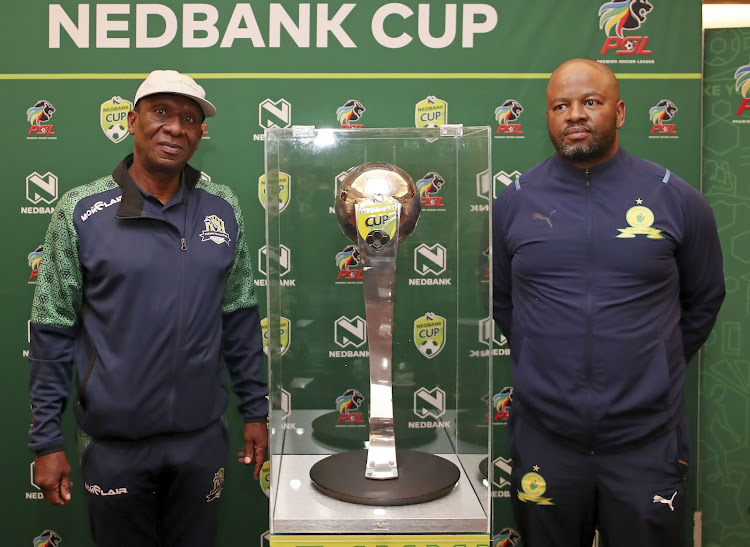 As they stand on the cusp of a rare domestic treble, Mamelodi Sundowns coach Manqoba Mngqithi has given rare insight into to how he managed to navigate through the co-coaching arrangement at the club.

In October 2020, Steve Komphela joined Sundowns as first team coach to work with Mngqithi and Rulani Mokwena in this unusual arrangement and they where initially ridiculed by rivals' fans as “Shadrach‚ Meshach and Abednego”.

The move has worked wonders as they have led the Brazilians to back-to-back league titles and they take on Marumo Gallants at the Roya Bafokeng Stadium on Saturday looking to complete the treble and clean weep.

“I would not blame people for having been pessimistic, because it was a new thing of having three coaches in the team,” said Mngqithi as Sundowns prepared to take on Gallants.

“If my five percent in the 35 man squad is not going to make the team win, [it] is always important to gather the other percentages from others and even the physio who speaks positively to the players to say I know you can do it and you can do it for the club.”

Mngqithi said he learnt the principles of working with other coaches from the early stages of his coaching career at Maritzburg City.

“I got a very good induction and I am always grateful to my own induction because at my younger stage, even before I qualified, I worked for Maritzburg City.

“Maritzburg City was playing in the ABC Motsepe League and in that team we had a technical director in Thabo Dladla, we had Reggie Shelembe as head coach, myself as assistant coach, Thami Mahlanzi second assistant coach and Mhlanga Madondo was team manager, but he was also a level two coach.

“Those who know Maritzburg City will tell you what kind of a team we had. That for me was the best induction, because we played the best football. From there on, with all the coaches that I have worked with, I have always worked with more than one assistant coach because I know how important it is to have a little bit more brains on the team to make sure you get what you want.

“But what is more important is the leadership within the group, if in that group you entertain all sorts of petty issues and stupid fights you don’t see the light. But if you always try to inculcate the mentality that everybody is important and everybody's views must be listened to without anyone undermining you, you stand a chance of achieving more.

“There are many teams in the league that have more than one coach, but nobody talks about them when they don’t succeed, but when they start to succeed maybe there will be something.

“The truth of the matter is it is a very healthy set-up. I watched Brazil at the World Cup in 2014 and the technical team had their own bus. That says something that other countries have realised [how] important it is to have a big technical team with brains that are focusing in one direction.

“I went to the Gothia Cup with the Golden Arrows youth team when I was still there and the Georgian technical team had more than 15 people for an U15 team. In SA they [had] one coach guys, you cannot have two, no kit manager the coach will be the kit manager.

“So, it is very important to copy the right things and I think I copied those things from my youthful coaching era and that’s why [it] is benefiting us now.”