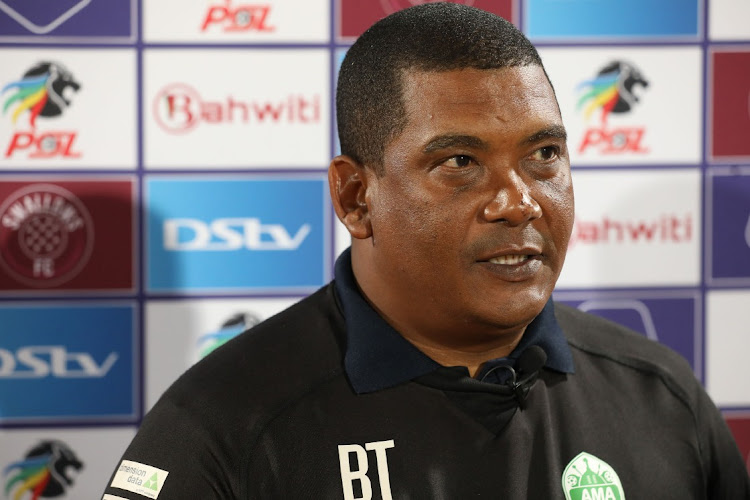 AmaZulu interim coach Brandon Truter has given chairperson Sandile Zungu something more to think about by telling him that he can challenge Mamelodi Sundowns for the DStv Premiership title next season with this team.

Truter has done well since he took over from Benni McCarthy in March, with only one defeat in seven matches he has been in charge of, conceding only two goals and that came during their 1-2 defeat to Golden Arrows on Tuesday.

As Zungu is still not decided who will take over permanently, Truter did not hide his interest to coach the club next season as he has been vocal in the past few weeks.

“Given the opportunity, I think I can transform AmaZulu into the title-challenging team for next season,” Truter told the media after their defeat to Arrows at Moses Mabhida Stadium.

“If you look at the results, I would say any coach who has gone unbeaten for so long and not conceding for so long, and have the squad buy into the philosophy I want to play, based on that and results purely I would say if it was another coach he has done enough to secure a job.”

Truter managed to guide Usuthu to a top-eight finish and said there were positives to take going into the new season to build on.

“We achieved a top-eight finish so there is a lot to look forward to,” he said.

“Look, if results went our way which we were hoping to get into the top four it would have been nice, but I have been involved in eight games and in those matches, I think we ended second in this quarter.

“Had we won the game against Arrows, we would have won the quarter innovation, and looking back where the club was and the run they were in at that moment when I took over, a lot has changed.

“Some players came back and put their hands up; the atmosphere and everything looked positive.”

Meanwhile, Arrows interim coach Vusumuzi Vilakazi said it is up to Mato Madlala to decide who she appoints despite doing well since taking over from Lehlohonolo Seema.

“It is up to the club to do that. First of all, we never said Mato gave us a chance, she is the one who decided that we must take over,” Vilakazi said.

“Even if she says let’s go and clean the toilets we will go and do that. It was not an element of being desperate but we thank her for the opportunity.”

Veteran goalkeeper Jackson Mabokgwane, who joined Baroka on a short-term deal a month before they were relegated, has disclosed Bakgaga want to keep ...
Sport
2 months ago

We can take Sundowns down - Ndlondlo

Marumo Gallants midfielder Ndabayithethwa Ndlondlo believes they have a good chance of defending their Nedbank Cup when they take on Mamelodi ...
Sport
2 months ago

While he admits they failed to achieve the targets set at the start of the season, Orlando Pirates co-coach Mandla Ncikazi has insisted only the ...
Sport
2 months ago
Next Article