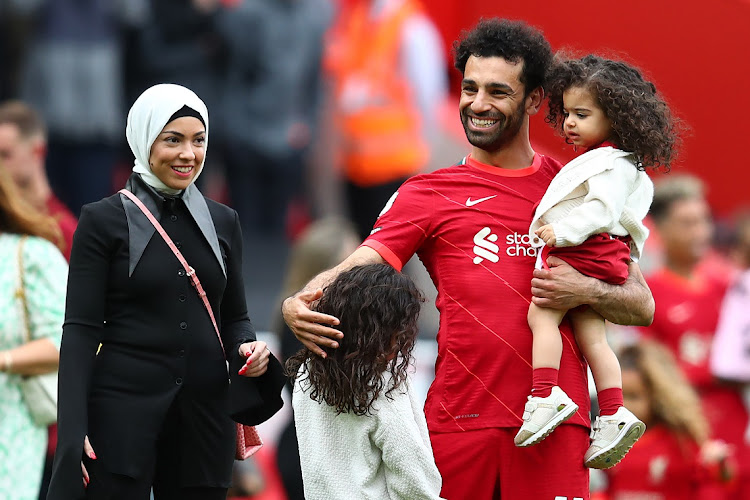 Liverpool striker Mohamed Salah with wife Magi and children Makka and Kayan at the end of the Premier League match against Wolverhampton Wanderers at Anfield in Liverpool on May 22 2022.
Image: Chris Brunskill/Fantasista/Getty Images

Missing out on the Premier League title on the last day of the season has given Liverpool an extra edge heading into the Champions League final, manager Juergen Klopp said.

Liverpool came from behind to beat Wolverhampton Wanderers 3-1 at Anfield but City hit back from 2-0 down to beat Aston Villa and clinch back-to-back titles.

Liverpool, who have already won the League Cup and FA Cup, could add a seventh European crown to their collection in the Champions League final against Real Madrid on Saturday.

“This season is absolutely incredible and will not end today, it ends next week obviously,” Klopp said. “And there we will try absolutely everything.

“We now have five days to prepare for the final. And of course, losing the league today increased the desire to put it right next week.”

“I am proud but I'm disappointed, of course, as well,” Klopp said. “There are maybe worse scenarios — if you would have been a point up and didn't make it, that might feel even worse.

“Congratulations to Manchester City, Pep Guardiola, all staff, all players, the whole club, for being champions. We were close but in the end not close enough. That's how it is.”

Liverpool face the Spanish champions in Paris Saturday in a rematch of the 2018 showpiece in Kyiv, which Real Madrid won 3-1.