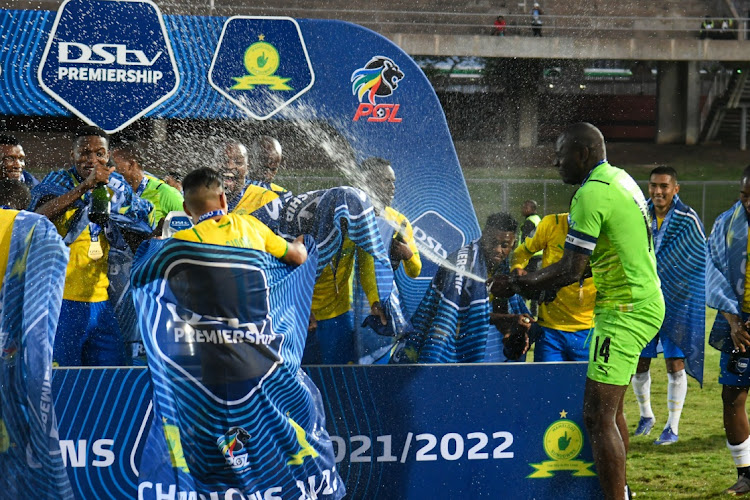 Sundowns celebrate with the trophy during the replay of the DStv Premiership match between Royal AM and Mamelodi Sundowns at Chatsworth Stadium on May 23, 2022 in Chatsworth.
Image: Darren Stewart

Mamelodi Sundowns wrapped up their DStv Premiership as they were finally awarded their trophy as they wrapped up their fifth successive title following a hard-fought 3-2 victory over Royal AM at Chatsworth Stadium yesterday.

The match was postponed from Saturday following heavy rainfall in Durban and the Brazilians had to put their title celebrations on hold.

The victory yesterday saw them reach 65 points this season, five behind the target of 70 they had wanted.

A flu outbreak on the eve of the game forced Sundowns to ring the changes as Kennedy Mweene, Lyle Lakay, Sphelele Mkhulise and Gaston Sirino came in for Reyaad Pieterse, Themba Zwane and Andile Jali, who started in the abandoned clash on Saturday.

But that didn’t stop Sundowns as they didn’t waste time getting settled and broke the deadlock after 12 minutes through a neat first-time finish by Gaston Sirino following a square ball by Mkhulise.

Sundowns didn’t feel unsettled by the home side’s pursuit in the closing minutes to halftime but remained calm on the ball and picked their passes at will throughout.

They continued with their dominance in the second half and doubled their lead immediately after the restart through Thabiso Kutumela.

Sundowns players tried to help Shalulile score more goals in the match but it was not to be as Royal defenders kept him at bay.

In the end, he could not match that record but will be pleased that he finished as the league’s top goalscorer with 23.

While Sundowns had already claimed the league title, yesterday’s fixture was still important for Royal, who were still chasing qualification for the CAF Champions League or CAF Confederation Cup spots.

And despite being 0-3 down, Royal who were known for their fighting spirit in matches this season, nearly produced another remarkable comeback as they scored two quick goals in the second half through Victor Letsoalo, who had missed a penalty before, and Shaune Mogaila.

With those two quick goals, the home side started to have the belief they can get an equaliser and put pressure on Sundowns, who lost their rhythm late in the second half. But that fighting spirit was not enough as Sundowns hung on for the victory.

Sundowns will shift their focus to the Nedbank Cup final against Marumo Gallants at Royal Bafokeng Sports Palace on Saturday at 6pm.

'You came so close to bringing it home': Mthethwa salutes Pirates after CAF Confederations loss

"You made us proud and you have demonstrated the competitiveness of SA football clubs that continue to excel in Caf tournaments," said Nathi Mthethwa
Sport
2 months ago

After the US Soccer Federation announced it will have equal pay for its men's and women's national teams, Safa vice-president Ria Ledwaba believes SA ...
Sport
2 months ago

Former Banyana Banyana captain Portia Modise says former coach Vera Pauw deserves to be credited for the progress women’s football has made in the ...
Sport
2 months ago

Baroka’s relegation from the DStv Premiership is going to hit them hard in their pocket. Bakgaga were relegated to the GladAfrica Championship on ...
Sport
2 months ago
Next Article