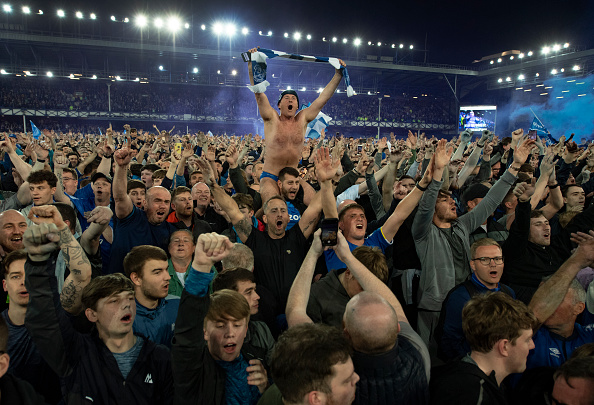 Everton fans invade the pitch after the Premier League match between Everton and Crystal Palace at Goodison Park on May 19, 2022 in Liverpool, UK.
Image: Visionhaus/Getty Images

Everton manager Frank Lampard was close to tears at the final whistle as his side staged a dramatic comeback to secure a 3-2 victory over Crystal Palace that ensured their Premier League survival at Goodison Park on Thursday.

Lampard called it “one of the greatest moments of my footballing life” as Everton rallied from two goals down at halftime to claim victory thanks to Dominic Calvert-Lewin’s header five minutes from time.

They can now go into Sunday’s final fixture at Arsenal with a huge weight lifted from the club.

“In my career, I’ve been fortunate to have amazing times, especially at Chelsea as a player and a coach. But when you feel the desperation of what relegation brings, it is something different.

“You need to dig in and it is tough. Coming here [to Everton] three months ago with my amazing staff, positive people that work so hard to try to change things, and then getting a reaction from the players and the fans ... this club is special and I’m very proud to be the manager of Everton on this night.”

Lampard celebrated wildly at the final whistle and then with fans up in the stands as supporters poured onto the Goodison Park pitch in celebration.

“I thought I might cry, I might jump out of my own body,” he said, before defending the pitch invasion.

“Nobody can question the celebrations at the end tonight. People can easily say, 'Well, the club haven't won anything’. But come and work at this club for a few months, see how much it means to people to stay in this league.

“See the character this team had showed. The fans have pulled us over the line, there is no doubt about it. They have been more than a 12th man and the players have played their part too.”