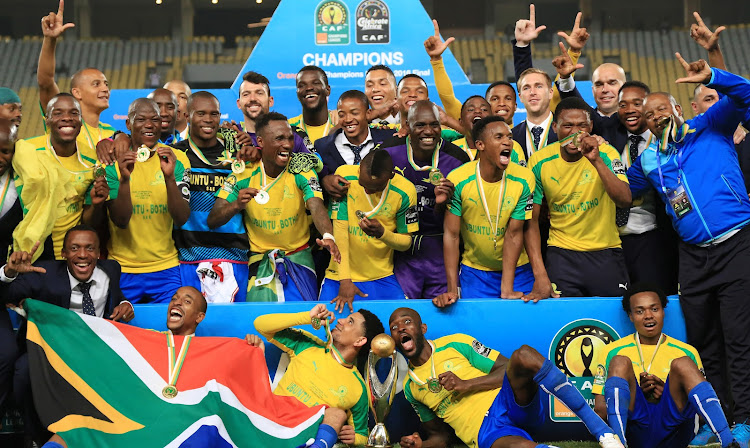 Mamelodi Sundowns remain the only team in SA to have won a CAF competition over the past ten years.
Image: Gavin Barker/BackpagePix

Over the past ten years, a few SA teams have showed serious appetite for continental competitions with some appearing in five CAF cup finals.

When Pirates take on Moroccan side RS Berkane in Friday night’s Caf Confederation Cup final against at the Godswill Akpabio International Stadium in Nigeria, it will for the third time they appear in a continental final since 2013.

The 1995 Champions League winners will be looking to be one of the few clubs to win both competitions and to erase the bitter memories of 2013 and 2015 where they lost to Al Ahly and Étoile du Sahel.

TimesLIVE looks at the five finals that involved SA teams over the past decade.

The first leg ended 1-1 at Orlando Stadium, but Al Ahly turned on the taps with Ahmed Fathy, Wael Gomaa, Mohamed Aboutrika, Emad Moteab and Trezeguet to win 2-0 in Cairo.

Orlando Pirates used their continental experience to reach the final under coach Eric Tinkler, but were outdone by Tunisian giants Étoile du Sahel, who triumphed 2-1 on aggregate.

Mamelodi Sundowns became the second SA team to lift the Champions League trophy after they beat Zamalek 3-1 on aggregate through goals by Anthony Laffor, Tebogo Langerman and an own-goal by Eslam Gamal.

This gave Sundowns a commanding 3-0 lead from the first leg at Lucas Moripe Stadium and Zamalek managed a 1-0 win in Alexandria.

Hot on the heels of Mamelodi Sundowns’ success in the Champions League, SuperSport United exceeded all expectations to make it to the Confederation Cup final the next year where they lost 2-1 on aggregate to TP Mazembe.

United lost 2-1 during the first leg in Lubumbashi with Sipho Mbule scoring the away goal, but the goalless draw at Lucas Moripe Stadium saw TP Mazembe crowned champions.

Against all expectations, Kaizer Chiefs made it to the Champions League final during the 2020/2021 campaign, but they were outplayed by vastly experienced Al Ahly under SA-born coach Pitso Mosimane.

In a one legged final at the Stade Mohammed V in Casablanca, Al Ahly scored three late goals through Mohamed Sherif, Mohamed Magdy and Amr El Solia as they registered their record tenth title.