Amabhakabhaka go through despite late goal by Libyans 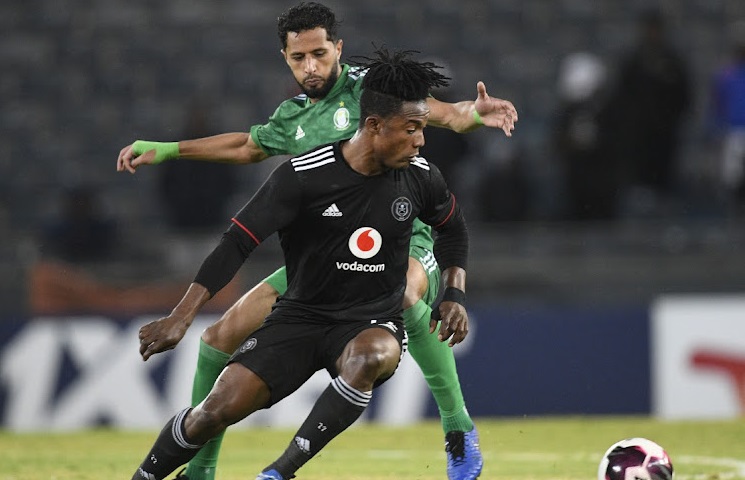 The two goals Orlando Pirates scored in the first leg of the CAF Confederation Cup semifinals against Al Ahli Tripoli away last Sunday proved crucial as they reached the final, despite losing the return leg 1-0 here last night.

Ali Abu Arqoub’s long-range strike in the 89th minute was the only goal of the match, where a pitch invader was manhandled by the security personnel for trying to attack the Pirates bench in stoppage time. Cheered by a vibrant crowd of about 5,000 spectators who braved chilly weather, Pirates started the game brilliantly, throwing everything at the Libyans from the word go.

Top-selling rapper Big Zulu warmed up the venue with a brief performance at halftime. His Imali Eningi hit called forth even those fans who were seemingly silenced by the cold weather to stand up and sing along.

Skipper Happy Jele should have broken the deadlock in the 12th minute but did not connect well with a high ball from Deon Hotto’s free-kick. Having missed more than 20 matches across all competitions since sustaining an unknown injury in October last year, Vincent Pule finally returned to action when he entered the fray in the 79th minute, replacing Hotto.

In what looked like a tactical substitution, Pirates introduced Siphesihle Ndlovu for Abel Mabaso as early as the 34th minutes. Ahli thought they had won a penalty inside the first 20 minutes when veteran Gambian referee Bakary Gassama adjudged Jele to have handled the ball inside the box before overturning his decision after checking the VAR monitor.

The swapping of flanks between Hotto and Bandile Shandu saw the rearguard in sixes and sevens. Ben Motshwari had a blinder in the first stanza, spraying long balls to isolated Kwame Peprah up front. At times, Peprah lacked support and ended up failing to threaten.

Pirates continued their supremacy in the second half, with Thembinkosi Lorch now in the thick of things. “Nyoso”, as Lorch is known in football circles, made Pirates tick by playing quick one-twos with Peprah and Hotto. Their attempts were only ruined by a lack of composure inside in the final third.

Stellenbosch beat a strangely lethargic Mamelodi Sundowns 3-0 to cement their place in the top eight on the DStv Premiership standings at the Tuks ...
Sport
1 month ago

PSL relegation battle to go down to the wire

The DStv Premiership relegation battle is set to go down to the wire after Baroka FC beat SuperSport United 3-1, while Swallows FC and TS Galaxy ...
Sport
1 month ago

How Kabelo Mahlasela got his groove back at Royal AM

Royal AM coach John Maduka has revealed how he managed to revive the career of former Kaizer Chiefs player Kabelo Mahlasela who has found a new lease ...
Sport
1 month ago
Next Article