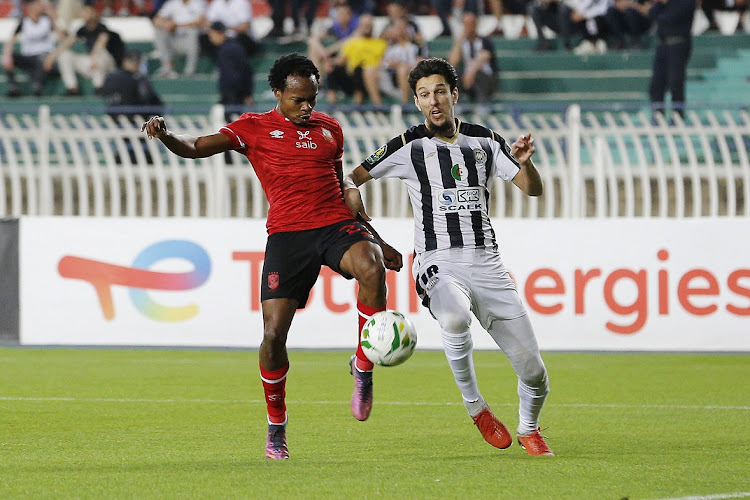 Percy Tau of Al Ahly is challenged by Hocine Laribi of ES Setif in the Caf Champions League semifinal second leg match at the July 5 1962 Stadium in Algiers, Algeria on May 14 2022.
Image: Ladjal Jafaar/BackpagePix

Holders Al Ahly of Egypt scored deep in stoppage time to draw 2-2 at Entente Setif of Algeria in their Caf Champions League semifinal second leg on Saturday and cruise into the final 6-2 on aggregate.

Pitso Mosimane-coached Ahly, who have a record 10 wins in the continent’s top club competition, moved one step closer to becoming the first team to win the Champions League three years in a row. They will face Wydad Casablanca in the final in the Moroccan city on May 30.

Ahly secured an emphatic 4-0 win in last Saturday’s first leg in Cairo and extended the aggregate lead well beyond Setif’s reach with a goal two minutes into the second leg from Ahmed Abdel-Kader after a series of slick passing moves.

But the home side equalised just before the break in Algiers through Ahmed Kendouci's close-range shot and looked on course for a consolation win when a rasping shot from Riad Benayad put them 2-1 up just after the hour mark. Ahly's Mohamed Sherif squeezed the ball home to grab a last- gasp equaliser for the Egyptian side.

Wydad booked their place in the final on Friday with a 4-2 aggregate triumph over Angola’s Petro Atletico. The second leg of their semifinal in Casablanca ended 1-1.

The decision by CAF to award Morocco the hosting rights of the Champions League final on May 30 has left Al Ahly coach Pitso Mosimane shocked.
Sport
1 month ago
Next Article