Norwegian striker Erling has agreed to sign for Man City 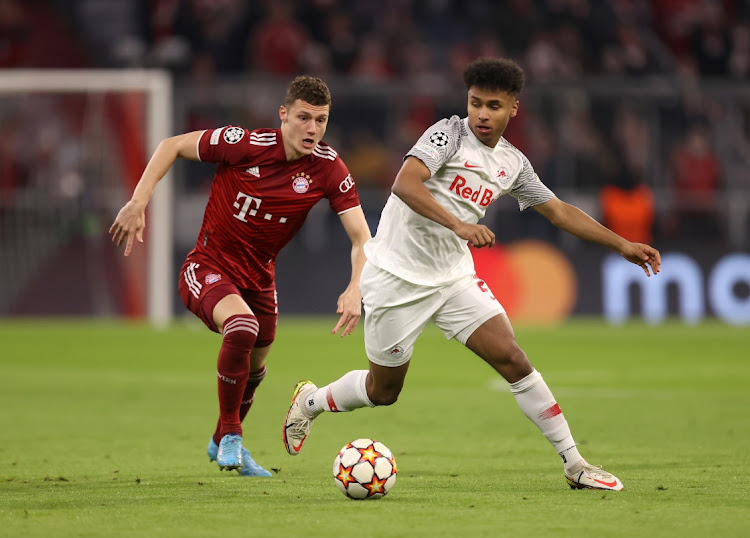 Karim Adeyemi of FC Red Bull Salzburg runs with the ball under pressure from Benjamin Pavard of FC Bayern Muenchen during the UEFA Champions League Round Of Sixteen Leg Two match between Bayern München and FC Salzburg at Football Arena Munich on March 08, 2022 in Munich, Germany.
Image: Alex Grimm

Adeyemi has previously been linked with a move to the English Premier League. The 20-year-old made 42 appearances in all competitions this season, scoring 23 goals.

"Karim Adeyemi is a highly talented young German international who, through his strong finishing and incredible pace, will make a valuable addition to our attacking play," Dortmund sporting director Michael Zorc said.

He is the Austrian Bundesliga's top scorer with 19 goals this season and he has also been capped three times by Germany, scoring once.

"As soon as I heard Dortmund were interested in me, I knew I wanted to sign with BVB," Adeyemi said.

"I made the conscious decision to sign a long-term deal because I'm convinced that we're going to form an exciting team."

Adeyemi has big shoes to fill, however, with Haaland set to depart in the close-season.

Premier League side City reached an agreement to sign Haaland from Dortmund on July 1, with the transfer subject to the club finalising terms with the Norwegian striker, City said.

City did not provide financial details of the deal but German media reported that the total cost of buying Haaland in a multi-year deal could exceed €300m (about R5.1bn), including his salary, agent fees and bonuses.

Dortmund said once the transfer goes through, the club expects a "positive effect on the key earnings figures for the 2022/2023 financial year" in the range of €35m to €40m.

The 21-year-old striker's value has skyrocketed, thanks to his prolific form at Dortmund after joining them from Austrian side Salzburg two years ago.

British media reported Haaland had passed his medical on Monday, with Liverpool boss Jurgen Klopp saying it was a transfer that will "set new levels" in the Premier League.

Haaland has scored 85 goals in 88 games for Dortmund since his debut in January 2020. He was last season's top scorer in the Champions League as well as the Uefa Nations League.

This season he has 21 goals in the Bundesliga from 20 starts, with Dortmund set to finish second in the league behind champions Bayern Munich when the season concludes on Saturday.

Chippa United refused to dwell much on Swallows' troubles ahead of their relegation battle at Dobsonville Stadium on Saturday at 3pm.
Sport
1 week ago

Golden Arrows co-interim coach Vusumuzi "Kanu" Vilakazi has emphasised the importance of beating provincial foes Royal AM if they're to secure a ...
Sport
1 week ago

While he's waiting for the PSL Dispute Resolution Chamber (DRC) to order his former side Swallows to pay what they owe him, AmaZulu coach Brandon ...
Sport
1 week ago

AmaZulu will lean on their defensive expertise to get a result on Saturday when they take on Cape Town City at the Cape Town Stadium at 3pm.
Sport
1 week ago
Next Article