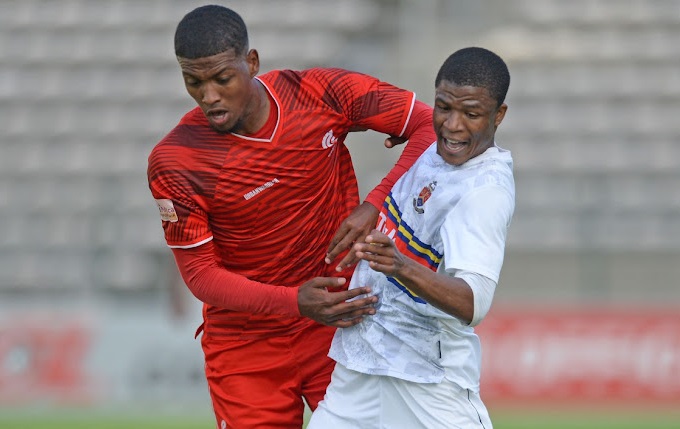 University of Pretoria head coach Tlisane Motaung lamented a stomach bug that infiltrated his side ahead of the 2-2 draw against Cape Town Spurs in the GladAfrica Championship on Sunday at the Athlone Stadium.

The draw saw AmaTuks, who are second in the league, lose ground to Richards Bay, who are two points ahead at the moment.  Leading to the final match day of the season, the race for automatic promotion to the DStv Premiership is between the University of Pretoria and the Natal Rich Boyz.

The weekend began with both teams tied on 50 points. Richards Bay pulled out to 53 points thanks to a 2-1 win over TS Sporting, while AmaTuks earned one point from their match against Spurs to reach 51 points.

Shaun Bartlett's Spurs opened the scoring in the first half through Eyona Ndondo. Minutes later the visitors from Pretoria would find their equaliser via Etiosa Ighodardo and then make it 2-1 before halftime courtesy of a Wonderboy Makhubu goal. After grabbing the lead, AmaTuks would sit back and invite Spurs to attack.

Looking at the game one would have thought AmaTuks were struggling with the different conditions but it seems it was the stomach bug. Eventually, the Cape Town outfit returned to level terms with a header from Ashely Cupido and the game ended 2-2.

Reflecting on the game, Motaung revealed they had suffered from some form of food poisoning the day before. “They tried under the conditions because 70% of the team was having stomach aches,” said Motaung.

“We had supper at the hotel in Cape Town and that night the players were calling the medical staff complaining about stomach bugs, even the technical staff.

“It was rough. Some players were forced to play under those conditions. Frank Mpedi was a forced substitute because of that; he couldn't hold it. Others tried their level best. It was a difficult situation. It was one of the things that worked against us. We just need to regroup for the next match; it was not our own doing,” he said.

Motaung and his troops will host Hungry Lions on Sunday at the Tuks Stadium. He's optimistic about their chances of gaining promotion.

“The most important thing is to continue believing, it's still possible for us. We have one game, Richards Bay also. We need all three points for us to win it, hoping that Richards Bay will drop points. We need to win the match. It will be great to get automatic promotion but it's not in our hands,” said Motaung.

Mamelodi Sundowns coach Manqoba Mngqithi has made it clear they intend to bolster their already star-studded side for next season.
Sport
1 month ago

Kaizer Chiefs caretaker coach Arthur Zwane has entreated the club to go for someone who will not change the style of play he’s introduced since ...
Sport
1 month ago

Orlando Pirates may seemingly have one foot in the CAF Confederation Cup final following their 2-0 victory against Al Ahly Tripoli in the semifinal ...
Sport
1 month ago

Kaizer Chiefs and the National Soccer League (NSL) have reached a settlement regarding two matches the club failed to honour in December.
Sport
1 month ago
Next Article