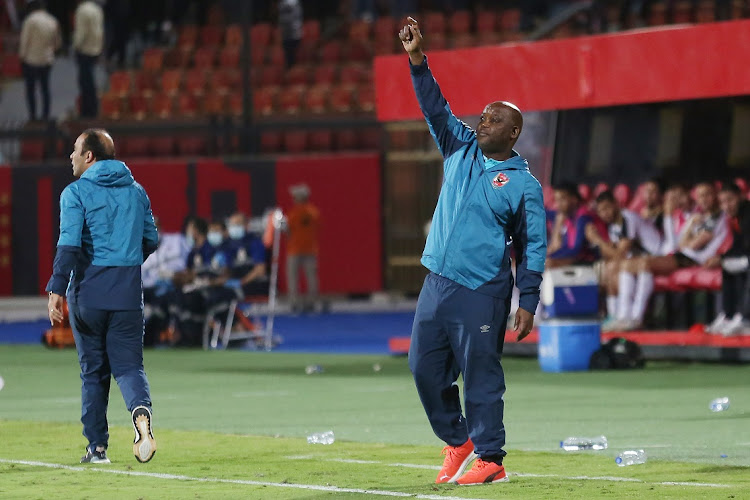 With Al Ahly’s 4-0 semifinal first leg win against ES Setif on Saturday Pitso Mosimane remains on track for a record that would set him apart in African football coaching.

Mosimane would become the first coach to win three Champions League trophies in succession if Ahly go all the way again in the 2021-2022 edition, which they remain convincingly on course for after Saturday's result.

With their big win at Cairo’s Al Salam Stadium, where Percy Tau scored a brace and provided an assist, Ahly seem a shoo-in, barring a spectacular choke in the second leg in Algiers on Saturday night for a place in their third final in succession.

Mosimane, after his move from Mamelodi Sundowns to the Egyptian giants in September 2020, steered Ahly through the 2019-2020 semifinals with a 5-1 aggregate win against Moroccan powerhouse Wydad Athletic.

In winning a first Champions League title — the trophy Ahly covet most — in seven years for the club, beating bitter Cairo rivals Zamalek in the final, Mosimane endeared himself to the Red Devils’ fanatical supporters.

Mosimane equalled Ahly’s legendary coach Manuel Jose’s record as the only coach of the club to win back-to-back titles by beating Kaizer Chiefs 3-0 in the 2020-2021 final.

He joined an elite group of just five coaches in the competition’s 57-year history to have won the trophy for two years running.

Democratic Republic of the Congo’s Célestin Tambwe Laye won with his country’s TP Mazembe in 1967 and 1968 and Argentinian Oscar Fullone with Ivory Coast’s ASEC Abidjan in 1998 and Morocco’s Raja Casablanca in 1999. Jose won the Champions League with Ahly in 2005 and 2006 and Tunisian Moïne Chaâbani won with his country’s Espérance Tunis in 2018 and 2018-19.

Mosimane, who also won in 2016 with Sundowns, is alone in second place to all-time top-winning coach Jose (four titles, with the others also claimed for Ahly in 2001 and 2008) having won the Champions League three times.

If he wins again in this season’s edition, the South African will draw level with Jose on most titles won, then probably set his sights on matching the Portuguese’s four at Ahly.

While it is fine for the media to speculate and draw attention to these possibilities, Mosimane would be the first to point out that speaking of such potential records runs the danger of getting ahead of the realities.

Ahly still have to secure the semifinal tie in Algeria on Saturday, then need to negotiate past tough Wydad — also almost a shoo-in for the final after a 3-1 first leg win against Petro Atletico in Angola on Saturday — to lift the trophy again.