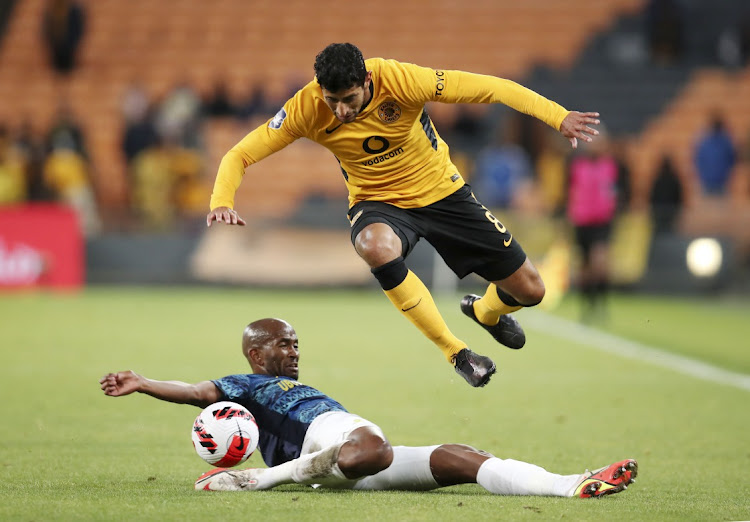 Keagan Dolly missed a late penalty that would have kept Kaizer Chiefs' dream of  finishing second alive, as they played to an entertaining 1-all draw against DStv Premiership champions Mamelodi Sundowns at FNB Stadium yesterday.

Referee Xola Sitela awarded the hosts a penalty when Kgaogelo Sekgota was brought down inside the box in about the 80th minute. Sundowns keeper Reyaad Pieterse stopped Dolly's spot-kick to keep the scores level.

Having netted a world-class goal against Sekhukhune United last Tuesday, Aubrey Modiba managed another brilliant goal, a volleyed effort that left Bruce Bvuma hapless four minutes into the second half. Modiba's goal sparked a frenzy as the Yellow Nation set off colourful flares soon after it. Chiefs would answer via Phathutshedzo Nange in the 76th minute.

About  3,500 fans made the trip to the stadium in the freezing weather. The visiting fans, in the far stand, were the more energetic.

Making only his first start in three league games this season, transfer-listed Lazarous Kambole was a surprise inclusion in the Chiefs starting line-up. The vaunted “CBD", the attacking unit of Leonardo Castro, Khama Billiat and Dolly that terrorised defenders between 2015 and 2016 for Sundowns, rarely led the Amakhosi attack.

The trio scored a combined 25 league goals to help the Tshwane giants win the 2015/16 championship. Dolly and Billiat had started a number of games together at Chiefs but Castro always joined the party from the bench.

In a move  that could perhaps go a long way to mending their relations, especially after the brouhaha Chiefs sparked by accommodating  Sundowns' Champions League opponents Al Ahly in March, Amakhosi gave the Brazilians a guard of honour as champions.

Chiefs remain fourth and their chances of finishing second – and securing CAF Champions League football next season – are all but gone as they have just two more matches left.

Orlando Pirates have a foot in the Caf Confederation Cup final after a polished 2-0 victory in the opening, away leg of their semifinal against Al ...
Sport
1 month ago

Orlando Pirates co-coach Mandla Ncikazi says his teams need at least one away goal from the first leg of their Caf Confederation Cup semifinal ...
Sport
1 month ago

Chippa and Baroka play to lively draw in Gqeberha

Baroka and Chippa United played to a lively 2-2 DStv Premiership draw at a rainy Nelson Mandela Bay Stadium on Saturday afternoon.
Sport
1 month ago
Next Article