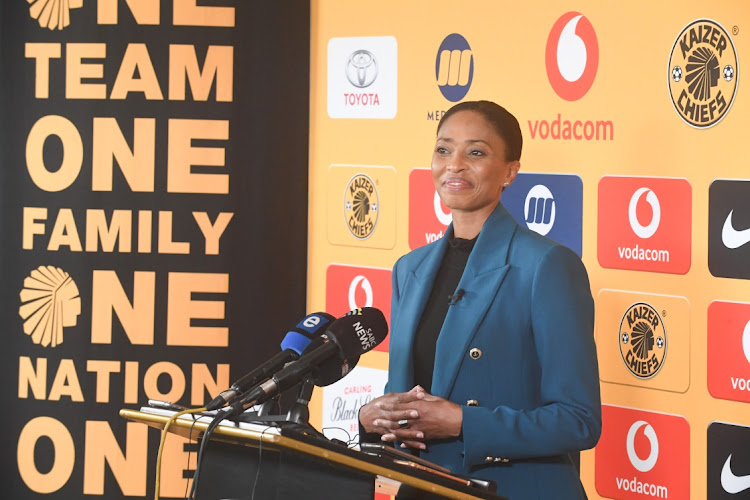 Jessica Motaung announces her appointment to a role at CAF in which she will work in the continental women’s football during a media briefing at Chiefs Village, Naturena.
Image: Sydney Seshibedi

Motaung will hold the CAF role until 2024. Speaking at a media conference to confirm the appointment at Chiefs' headquarters in Naturena yesterday, Motaung outlined that her role mainly entails helping women's football generate revenues through bringing sponsors on board. The Chiefs marketing guru will be heavily involved in marketing the Africa Women's Cup of Nations that will be staged in Morocco from July 2 to July 23.

“I look forward to leveraging the resources around us, but most importantly I think the commercialisation of the space is something I can bring to the party. I look forward to the women’s Afcon which is happening in July,” said Motaung.

"As we know, women’s football is growing internationally. We’ve seen record numbers in events and the commitments by Fifa and CAF is to make sure that they’ve set up strategies that are not looking at the development of the game but also the commercialisation of the game by attracting more sponsors, that's where I fit in.”

Motaung also maintained plans are afoot for Amakhosi to establish a women's side, vowing they'll make an announcement in the next few coming months. Sowetan has since established that Chiefs aim to adopt one of the Sasol League teams instead of starting a women's outfit from scratch.

Meanwhile, Motaung wasn't keen to be drawn into the coaching situation at the club as it's not yet clear if interim mentor Arthur Zwane will be given the job on full-time basis. "We continue to apply our mind on the coaching situation. And well done to the team on the win yesterday [against Marumo Gallants]. We’ll finish the season off and obviously make the announcement in due course,'' said Motaung.

Mamelodi Sundowns coach Manqoba Mngqithi says the club will use the remaining DStv Premiership matches as preparation for their Nedbank Cup final ...
Sport
2 weeks ago

Having been given a new lease of life in his coaching career, Owen da Gama says he is ready to unearth another Peter Shalulile in Nkanyiso Madonsela.
Sport
2 weeks ago

Swallows trainer Dylan Kerr is convinced their dire form has more to do with players' negligence, feeling he's doing his job meticulously and the ...
Sport
2 weeks ago

After Dumisani Zuma’s suspension by Kaizer Chiefs this week, interim coach Arthur Zwane has offered guidance to the players to remain disciplined if ...
Sport
2 weeks ago
Next Article