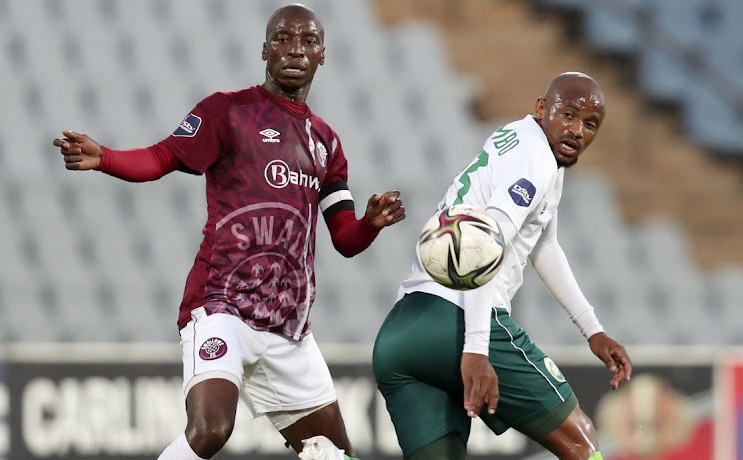 Xola Mlambo of AmaZulu challenged by Musa Nyatama of Swallows FC during the DStv Premiership 2021/22 match between Swallows and AmaZulu.
Image: Muzi Ntombela/BackpagePix

Before the game, Usuthu coach Brandon Truter made it clear the game was sentimental for him as Swallows are his former side, who sacked him late last year, meaning he has had the last laugh. Truter remains unbeaten since he joined Usuthu with three wins and a draw.

The home side were still the better side, in terms of ball retention and box entries, even in the second half. Striker Ruzaigh Gamildien staggeringly missed two sitters, that would have changed the complexion of the game, in quick succession a few minutes before the hour-mark.

Those two missed chances would come back to haunt the Birds when, against the run of play, AmaZulu net through Maduna after being teed-up by Andre de Jong in the 68th minute.

The first half didn't really produce big moments but Swallows looked more determined than the visitors, using Monnapule Saleng's left flank to penetrate. Saleng gave AmaZulu right-back Mbongeni Gumede all sorts of problems. Gumede's failure to contain Saleng forced centre-back Abbubaker Mobara to neglect his role at the heart of defense to assist his teammate at right-back, leaving a hole for Swallows to come direct at them.

Swallows' direct approach created them a few half chance but Mwape Musonda couldn't tuck them away. Usuthu skipper Veli Mothwa produced a wonderful save to deny Saleng midway through the first period in what was the first 45 minutes' best opportunity. Mothwa would take his time whenever he had to take a goal-kick, a sign Usuthu didn't mind getting a draw.

Maduna and Luvuyo Memela were AmaZulu's better players amid their struggle to knuckle in the first period. The duo combined brilliantly on a few occasions but their attempts to create something proved futile in the final third as their third, where striker Siphelele Mthembu struggled to feed off the pairs' brilliant interplays.

The Birds are now just left with three games to escape the dreaded drop but will take heart from the fact that they are five points clear of last-placed Baroka, who host Golden Arrows today.

There were about 700 supporters at FNB Stadium on Tuesday evening who might feel they didn’t get a performance and atmosphere worth their while and ...
Sport
3 weeks ago

AmaZulu interim coach Brandon Truter has described his return to Dobsonville to face low-flying Swallows FC in a DStv Premiership encounter on ...
Sport
3 weeks ago

Football social media hotshot Junior Khanye is worried the club’s downward spiral could destroy Arthur “10111” Zwane’s coaching career before it even ...
Sport
3 weeks ago
Next Article