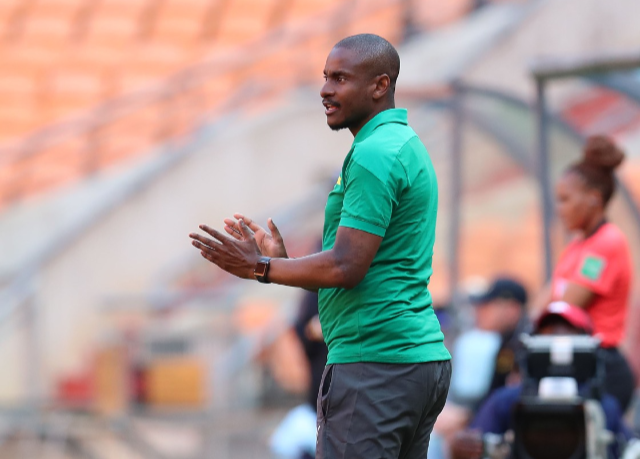 Mokwena feels this phenomenon does not only hinder development of football in the country, but it is also a kick in the teeth to those who have gone out of their way to get their coaching badges.

“I don’t hear a lot of us talking about it, but it’s not for me to discuss. But in the end, to be honest, it’s a sad reality.

“I see a lot of things that are happening and I ask myself if the coaching profession is really respected in this country?

Mamelodi Sundowns co-coach Rulani Mokwena is concerned about people allowed to coach in the PSL without coaching qualifications. pic.twitter.com/fcdr1QZEhh

“But look, we are here to talk about the Nedbank Cup and maybe one day we will discuss it,” said Mokwena ahead of their semifinal match against Royal AM at Chatsworth Stadium in Durban on Saturday (7pm).”

The former Orlando Pirates coach feels this is an issue that can’t be left unaddressed as it makes a mockery of the profession.

“But I do expect maybe the media to be talking about some of these things. We are sitting in a position where, from a club licensing perspective, there are certain requirements that are needed to sit on the bench,” Mokwena said.

“And then we have a lot of things that are happening in our country, people just sit on the bench and just coach players. What does that say about the hours that some of us put in, working hard to get to this sort of level?

Though Mokwena didn’t mention any names of people or clubs, his concerns caught the attention of Chippa United general manager and now assistant coach Morgan Mammila.

In what is seen as responding to Mokwena, Mammila, who sat on the Chippa bench without any qualifications, in a series of tweets said he knows what he has achieved in football.

He accused Mokwena of misleading the media and supporters.

There is no formula of becoming a top coach and we will never follow the same route for success. Give coach other coaches Baroka FC or Maruma Galliants and see if they can win a cup .

It is easy to achieve when coaching a team with resources. pic.twitter.com/Q2FWuDGeRg

He is coaching while learning. There is waiting period from D-C 6 months, C-B 12 months , B-A 24 months, A/ Pro 36 months. There are few coaches who qualify for Pro in SA.

I don’t why people like to misleading the media and our supporters. Even Pitso obtains Pro while working.

We have seen Highly qualified coaches failing Orlando Pirates for the past ten years . Google the list of coaches who failed at Pirates and you will laugh. Some people forget so easily 😅😅 pic.twitter.com/Cjjx55pgLf

I know what I have achieved in football . I started football at Castle League. Go to Sekhukhune Region and ask about Maatlopo United you will hear about Morgan Mammila .

Baroka from ABC Motsepe to Premiership my name is there .I’m not with big teams but I know what I’m doing

“I know what I have achieved in football. I started football at Castle League. Go to Sekhukhune region and ask about Maatlopo United, you will hear about Morgan Mammila. Baroka from ABC Motsepe to Premiership, my name is there. I’m not with big teams but I know what I’m doing,” Mammila tweeted.