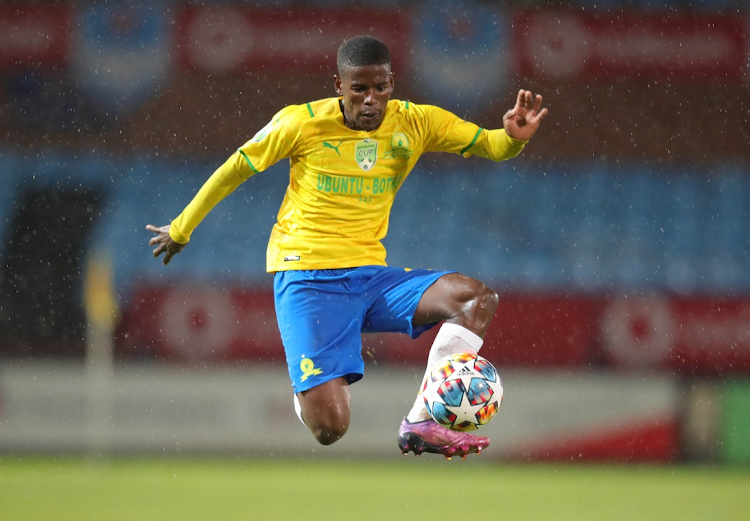 Neo Maema of Mamelodi Sundowns during their Nedbank Cup quarterfinal against Summerfield Dynamos at Loftus Versfeld in Pretoria on April 9 2022.
Image: Samuel Shivambu/BackpagePix

Mamelodi Sundowns are dealing with bitter disappointment in the Caf Champions League but have to remind themselves they have everything to play for in the DStv Premiership, where they can clinch the title against Cape Town City in Pretoria on Wednesday night.

Sundowns need a point to extend their phenomenal record to five successive league titles and their 12th overall when they host City at Loftus Versfeld (7.30pm).

The Brazilians suffered a devastating third quarterfinal exit in succession in the Champions League with their 1-1 draw at FNB Stadium for a 3-2 aggregate score and shock defeat to Angola's Petro Atletico on Saturday.

Midfielder Neo Maema, 26, one of the finds of the 2021-22 season after his transfer from Bloemfontein Celtic in July, said Downs can have the ultimate antidepressant if they do the job required against City.

“After the exit in the Champions League we only got 24-hours to be disappointed, to feel the way we feel — disappointed, angry and mad,” he said.

“It’s our responsibility to shift our focus to the league. It wasn’t easy to deal with going out of the competition that we really wanted to go all the way in but it’s football and it happens.”

“The universe doesn’t always give you what you want. You have to fight for it and unfortunately we got out before the semifinals but we are preparing to look forward to the next one.”

“City are always a hard team to play against. In their past five games they’ve won four and only drew their last game [1-1 against Royal AM at home]. It only means they are high in confidence and they are going come at us.

“The league is still there and also the Nedbank Cup. We are looking forward to finishing the league and the season very strong.”

Eric Tinkler's competitive City (40 points from 24 games) are in third place and know that, with two games in hand on second-placed Royal (45 from 26), they have a good chance of a runners-up finish and place in next season's Champions League.

Coaches Manqoba Mngqithi, Rulani Mokwena and Steve Komphela’s awe-inspiring Sundowns, this season’s MTN8 champions, are chasing a treble in 2021-22 as they also face Royal in their Nedbank Cup semifinal on Saturday.