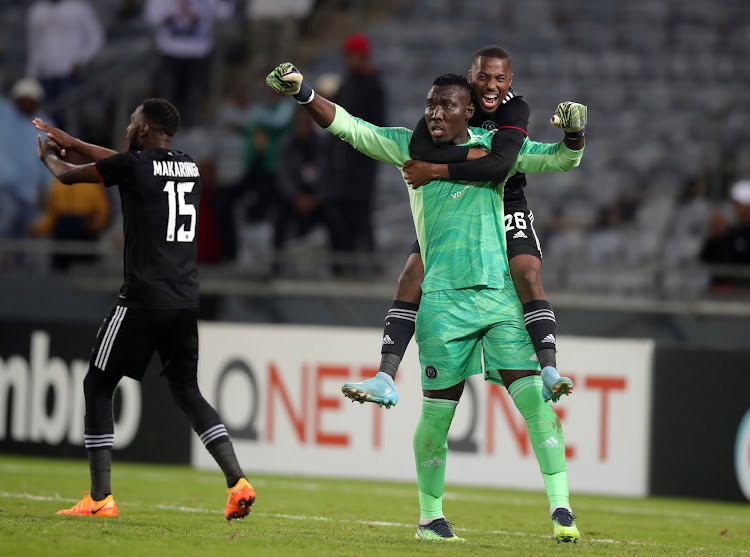 Richard Ofori was the hero for Orlando Pirates as the goalkeeper saved a penalty and scored the winning spot kick to knock Simba out of the Caf Confederation Cup at the quarterfinals stage.
Image: Samuel Shivambu/BackpagePix

Having felt hard done by Simba’s inhospitality in the first leg last Sunday as coach Mandla Ncikazi claimed they were “treated like animals”, Orlando Pirates had the last laugh at Orlando Stadium last night when they beat the Tanzanians to reach the CAF Confed Cup semifinals.

Pirates needed a 4-3 penalty shootout win to settle this quarterfinal tie. Goalkeeper Richard Ofori slotted in the winning spot-kick, having had also saved one. Pirates won the game 1-0 but that they lost via the same scoreline in the away leg meant the tie was tied at 1-all on aggregate.

The second stanza thrust into drama when Seychellois referee Bernard Camille, after consulting VAR, sent off Simba striker Crispin Mugalu for stamping on Ndah. It didn’t take long before the hosts capitalised on the red card as Kwame Peprah’s well-connected header from a brilliant cross by Innocent Maela put them ahead and tied the game 1-all on aggregate on the hourmark.

Tempers flared after Simba were reduced to 10 men as the Pirates medical team and the Simba bench were involved in a heated confrontation that would end with one Pirates official being given his marching orders as well. Camille would later in the match ignore two penalty shout from Pirates, refusing to even go to the VAR monitor.

Having conceded a penalty that resulted in  the solitary goal that sank them in the away leg last Sunday, skipper Happy Jele was dropped from the line-up with Olisa Ndah, who missed the trip to Tanzania owing to an unspecified illness, taking his place to partner with Ntsikelelo Nyauza.

Cheered by their supporters, who hadn’t been at Orlando Stadium since sports venues were allowed to be half-full, Pirates delivered what’s arguably the most enterprising first half they have had this term. A goal was the only missing element in what was a blistering first 45 minutes for the hosts. In what appeared to be a tactical change, Pirates introduced Linda Mntambo for Abel Mabaso at the start of  the first stanza.

The itsy-bitsy crowd of approximately 5,000 people made the atmosphere electrifying with drums and vuvuzelas so loud you would hardly hear anything when a person next to you tried to engage you. A collision between Peprah and Simba goalkeeper Aishi Manula resulted in a lengthy stoppage inside the first 20 minutes. The visitors’ keeper received treatment hence the delay while Peprah was just okay to continue immediately.

Pirates’ fluidity was mainly inspired by the combination of Bandile Shandu and Thembinkosi Lorch on the right flank. The duo played a number of quick one-twos, putting Simba left-back Shomari Kapombe under a lot of pressure. Shandu and Peprah lacked the composure to convert Pirates’ best chances of the half. Pirates keeper Richard Ofori hardly got tested the entire first stanza.

Arthur Zwane: ‘We’re Kaizer Chiefs and we must play with flair’

Kaizer Chiefs caretaker coach Arthur Zwane has called on his players to adapt quickly to a new style of play that the club wants to implement after ...
Sport
3 months ago

Coach Manqoba Mngqithi could only admit to the hurt after Mamelodi Sundowns were spectacularly dumped out of the Champions League by Petro Atletico ...
Sport
3 months ago

Kaizer Chiefs started a new life without their sacked coach Stuart Baxter on a sour note when they were beaten 1-0 by Stellenbosch FC in a DStv ...
Sport
3 months ago

GladAfrica Championship side Cape Town Spurs have made an impassioned plea to sports minister Nathi Mthethwa to assist in professionalising match ...
Sport
3 months ago
Next Article