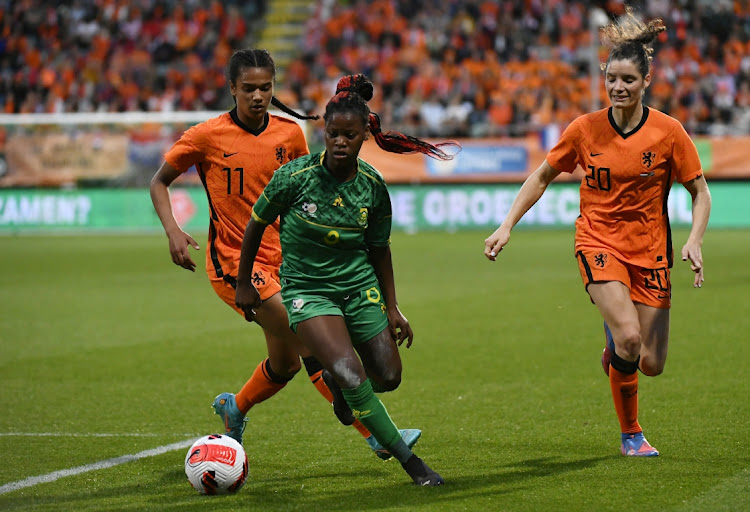 Banyana Banyana head coach Desiree Ellis is happy their 5-1 loss to the Netherlands on Tuesday night highlighted areas they need to work on as a team.

The fifth-ranked Dutch side was a class above Banyana Banyana on the day at the Kyocera Stadium in Den Haag. They had SA chasing shadows as Ellis's side could not match the intensity, precision and tactical execution of their opponents.

Holland opened the scoring through Jackie Groenen with 12 minutes played. Minutes later SA found an equaliser through stand-in captain Thembi Kgatlana. Banyana Banyana were upbeat but the quality of the Leeuwinnen would show when they scored two quick goals courtesy of Lineth Beerensteyn and Vivianne Miedema to hand them a 3-1 lead at the interval.

After the break SA had a golden chance to reduce the deficit through a penalty, however, veteran Noko Matlou’s attempt was saved by keeper Sari Van Veenendaal. Late in the second half Banyana Banyana were outdone by Damaris Egurrola who scored two goals to give her side a 5-1 win and a third over SA.

For Ellis and her team, the game was important to help them with preparations for the Africa Women Cup of Nations (Awcon) in Morocco in July. In her post-match interview Ellis acknowledged that the match did serve its purpose and they now know what they need to work on: fitness and defending set pieces.

“We wanted to see how the team plays under pressure. We have a lot of players that have not played league football and we were tested physically and mentally. We are not happy with the scoreline, but I think we showed what we need to do. We didn’t trust ourselves,” said Ellis.

“They sped up the game. Our fitness level is nowhere near what it should be, even though we are six weeks from the Algeria game. Ours has improved. A big thank you to the coaches but at this level it is about those moments.

“We needed this test. We said we are going to test ourselves before the Awcon and they duly tested us. It has given us a lot of things to work on: set pieces once again, conceding from set pieces. Is it an individual mistake, or is it a group mistake where the players are not doing anything?

“Most of the time it's a player leaving the player to get a header. Those are things we need to work on. We are not as tall or physical as most teams but we need to organise better,” Ellis said.

Banyana Banyana’s defensive unit say they are ready to face Arsenal women and Netherlands star Viv Miedema when they take on the Dutch today at the ...
Sport
3 months ago

Banyana Banyana head coach Desiree Ellis wants her charges to tackle their goalscoring problem when they take on the Netherlands on April 12 at the ...
Sport
4 months ago

Banyana Banyana have vowed not to be star-struck when they meet the Netherlands on April 12 at the Kyocera Stadium in Den Haag.
Sport
4 months ago

Banyana Banyana are set to continue with their preparations for the Africa Women Cup of Nations, which will be held in Morocco in July, by taking on ...
Sport
4 months ago
Next Article