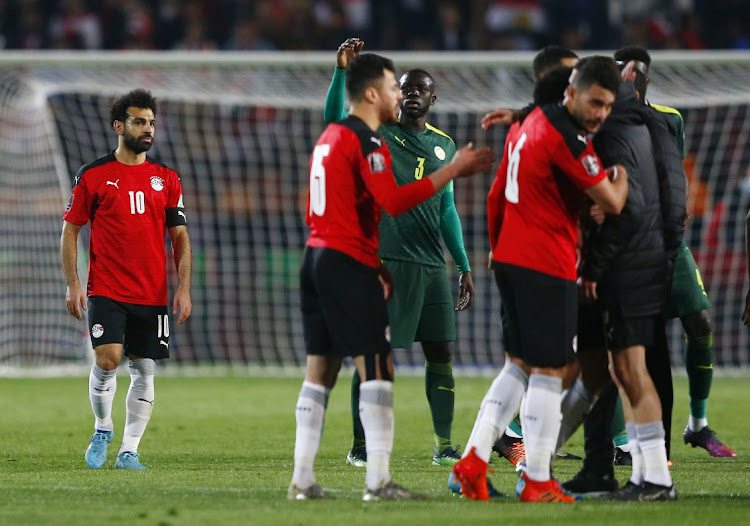 African champions Senegal will have to come from behind IN Dakar to qualify for the 2022 Fifa World Cup in Qatar after losing 1-0 against Egypt in Cairo.
Image: AMR ABDALLAH DALSH

Algeria, Morocco and Tunisia all took a significant step closer to the World Cup finals after Friday’s first legs of their playoff matches, but new African champions Senegal are going to have to come from behind if they are to qualify for Qatar.

The first leg results appeared to reflect a major shift in power north to the Arabic-speaking countries, who have long dominated African club competition and are now flexing their muscles at national team level too.

Islam Slimani scored for Algeria while Tunisia benefited from a horror own-goal as their sides won away in Cameroon and Mali respectively, while Morocco came from a goal down to draw in Kinshasa against the Democratic Republic of Congo.

Home advantage in Tuesday’s return legs sets them all up for a place in November’s tournament.

Egypt edged Senegal by a single goal as they met again six weeks after Sadio Mane’s team beat the Pharaohs on post-match penalties to win the Africa Cup of Nations.

This time it was his Liverpool teammate Mohamed Salah who grabbed the honours, hitting the crossbar in the fourth minute and then watching the rebound come off Senegal defender Saliou Ciss’s knee for an own goal.

But Senegal dominated proceedings away in Cairo and are more than capable of overturning the deficit.

Egypt coach Carlos Queiroz said his side would need to defend like devils in Dakar.

"It's a World Cup game, everything is open. We need to be more powerful, we need to do it double.

"We need to defend with 15 or 16 players. We will probably need to fight for our lives in Dakar," he told the Egyptian press, who questioned his game plan.

"History does not talk about those who play better. As we know, Italy played well against Macedonia [on Thursday] and they are out of the World Cup."

The West African derby between Ghana and Nigeria in Kumasi ended goalless, leaving it all to play for in Tuesday’s return in Abuja.

"We did well even though we made some mistakes, but we started well, there was just a little bit of fatigue and it made Nigeria come into the game more," said Ghana’s new coach Otto Addo after the game.

“We had two clear chances to finish off Ghana, but I think getting a draw is good even though we wanted to win here,” added his Nigerian counterpart Augustine Eguavoen.

The aggregate winners in the five playoff ties will represent Africa at the World Cup in Qatar.