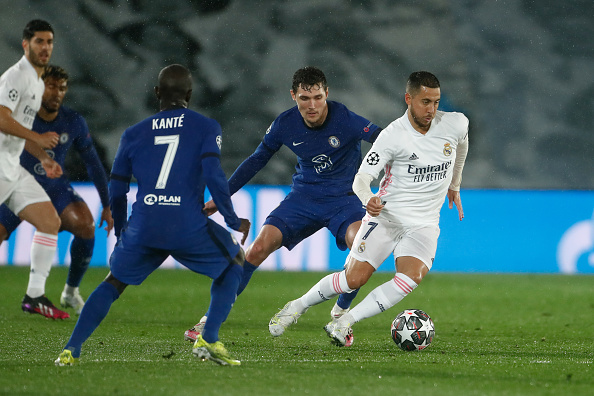 The Champions League draw threw up a mouthwatering range of possibilities on Friday as troubled holders Chelsea were drawn to play 13-time winners Real Madrid in the quarter-finals.

The three Premier League and three La Liga clubs in the last eight avoided each other, with Manchester City up against Atletico Madrid and Liverpool to face Portuguese side Benfica.

Liverpool or Benfica will face Bayern or Villarreal.

The quarter-final first legs take place on April 5-6 with the return legs the following week.

Former Chelsea manager Carlo Ancelotti will return to his old club for the first leg and current Stamford Bridge boss Thomas Tuchel described the challenge as a "tough one".

As things stand, Chelsea will not have any fans at either leg after UEFA said it would uphold EU sanctions against Russian owner Roman Abramovich who has had his assets frozen since announcing he was selling the club.

"The challenge cannot be higher," Tuchel told reporters on Friday.

"Playing the second leg in the Bernabeu with spectators is a big challenge. We know what's coming, but there is a big excitement around this fixture.

"It's nice to avoid the English clubs, it's always nice to play European teams."

Asked about the prospect of having no Chelsea fans at either leg, Tuchel said: "In general I think this game changes so much with spectators so hopefully we find a solution and I'm pretty sure everyone at the club, the board, will fight for a chance."

"Hopefully we make it happen somehow."

Real Madrid, beaten by Chelsea in last season's semi-finals, are 10 points clear at the top of La Liga while Tuchel's side are third in the Premier League.

Liverpool will consider a clash with Benfica as the best option from the draw and they could even face Premier League title rivals Manchester City in the final in Paris.

City will have to get past the considerable challenge of Atletico Madrid though - a clash that will be a fascinating contrast in styles and a tactical battle between Pep Guardiola and Diego Simeone.

It will be the first meeting between the two clubs.

* Team drawn first will play the first leg at home.

May 28 at the Stade de France, Paris