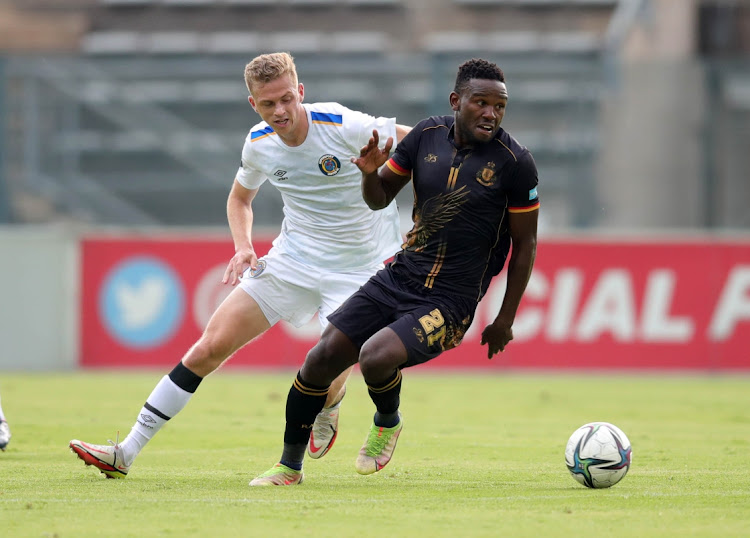 Victor Letsoalo of Royal AM challenged by Jesse Donn of Supersport United. Letsoalo has 11 goals this season.
Image: Samuel Shivambu/BackpagePix

Letsoalo has been outstanding this season, scoring 11 goals and establishing himself in Bafana Bafana's set-up. He's been named in Hugo Broos's preliminary squad to play against Guinea and France during this month's international break.

Maduka has been with Letsoalo since their days in Bloemfontein, watching him grow into a reliable goalscorer. The Malawian mentor says he's happy to have a player of Letsoalo's calibre, an international player, in his team.

“To see our players go to the national team or being recognised is very good for the team. Any coach will tell you they are happy to see their players in the national team; it makes it an easier job for me because we get exposure,” said Maduka, speaking in a virtual press conference ahead of their Nedbank Cup last 16 match against Swallows on Friday at the Dobsonville Stadium (6pm).

“It's good to have the player of Victor's calibre that is in the national team and has been doing well. I just hope that nothing else disturbs him, especially injuries, suspension or maybe loss of form.”

Letsoalo had been linked with a move to Gauteng in the January transfer window but his parent club has refused to sell one of its prized assets.

Maduka was quizzed about Letsoalo's commitment to the team as the transfer rumours continue to circulate. “With Victor, you can see he's grown to be matured. I've worked with him for quite a long time. You can see the maturity in him,” said Maduka.

“I think for him to be able to keep the position in the national team, he cannot afford for his performance to go down. So he's been working very hard. Again he's a team player, he's not selfish.

“He's still the same player when around other players. Most of the time when you have achieved something in life, you tend to change but Victor hasn't changed,” he said.

Mamelodi Sundowns made light work of third-tier side Mathaithai, thumping them 6-0 to book their place in the last eight of the Nedbank Cup at Lucas ...
Sport
3 months ago

Royal AM coach John Maduka wants his team to maintain their brilliant start to 2022, which has seen the Durban team climb to second spot on the DStv ...
Sport
3 months ago

Marumo Gallants are riding on the crest of a wave with four successive wins in all competitions in their last four matches and will be motivated to ...
Sport
3 months ago
Next Article