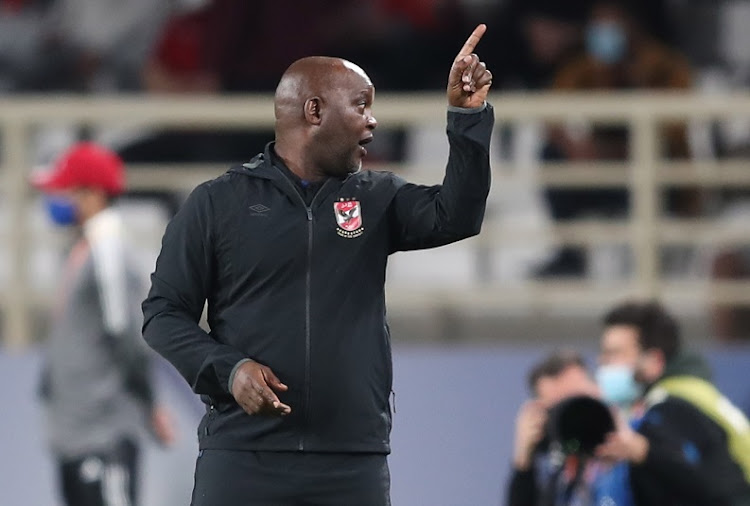 Al Ahly coach Pitso Mosimane has paid tribute to the late Thomas Madigage, who played a role launching his career at SuperSport United.

Every year the Ahly coach tweets a tribute to his friend on October 18, the day the 1980s teen prodigy find of Jomo Sono and teammate of Mosimane at Jomo Cosmos Madigage died in a car crash in Limpopo.

As he wound down an injury-plagued playing career at SuperSport United in the early 2000s, Madigage was influential advising the club to bring ex-Bafana Bafana, Mamelodi Sundowns and Ionikos striker Mosimane in as assistant coach to Bruce Grobbelaar.

Mosimane became SuperSport's head coach in 2001 and, with Madigage as his assistant, transformed the new DStv-owned side from strugglers to trophy winners and regular top six Premiership finishers.

After wrapping up Ahly’s second successive Fifa Club World Cup bronze medal last weekend, Mosimane was asked what his words would be to Madigage if he were alive, given the rarefied heights the coach’s career has reached 21 years after it kicked off at SuperSport.

“When he came over at Jomo Cosmos at 16, I looked after him, I was the big brother to him.

On this day 9 years ago, I lost my team mate, player, assistant coach, and my best friend. Thomas brought me to coach SuperSport United and played a key role in launching my career in the PSL…I will never forget the special moments that we shared. Miss you my brother 💔🕊 pic.twitter.com/2zF5RYyC9U

“I think Thomas was returning the favour. He said to me, 'I know your mentality, I know you're the one who can change the fortunes of SuperSport United'.

“I said, 'Thomas, are you serious?' because I had been coaching in Soweto at that time. He said, 'Yes, you're the one'.

“ I don't know if the guy was a prophet or what. I followed him and look what has happened.

"I believe in a different side of spirits . I believe he's looking and he's that angel protecting me, and he is proud of what I'm doing. I think without him I wouldn't be where I am now.”

Mosimane left SuperSport in 2007 to become Bafana assistant coach in the build-up to the 2010 Fifa World Cup, working with Brazilians Jairo Leal and head coach Carlos Alberto Parreira. He replaced Parreira after the World Cup.

“I've been given a helping hand. Jomo Sono and Screamer Tshabalala spotted me [as a player]," Mosimane said.

“Thomas brought me to SuperSport and gave me the chance [as a top flight coach]. Imtiaz Patel, the board and Khulu Sibiya said, 'We need a black coach. We've had a lot of white coaches, we need to change the narrative'.

Al Ahly coach Pitso Mosimane has described the bronze medal he got at the Fifa Club World Cup in Abu Dhabi as the most special one.
Sport
4 months ago

"[Ex-Safa bosses] Dr Irvin Khoza and Dr Molefi Olifant brought me into international football. They fought for me, and they said, 'You should stay here, you've got something'.

“As much as I am sometimes critical of my football federation, those guys were unbelievable and had vision for me.

"The former president of Safa, Kirsten [Nematandani] also gave me the chance to be head coach after the World Cup.

“You guys [the media] have helped me too, writing stories about me. Today I speak to BBC, ESPN, Brazilian media, interviews lining up and I'm not able to do them.

“I'm not Pep Guardiola. I'm an African coach, but the world is talking to us. It's unbelievable, so God bless.”

Ngcongca's demise a reminder to honour our heroes

Just after hearing about the death of Mamelodi Sundowns defender Anele Ngcongca, his former team RC Genk in Belgium paid him a tribute with the ...
Opinion
1 year ago

Tembo on Mosimane's passion as a coach: 'Coach Pitso cried‚ there at training'

SuperSport United coach Kaitano Tembo says he began to be inspired as a coach when he was still a player under Pitso Mosimane‚ relating the passion ...
Sport
1 year ago

Jomo Sono was emotional when he reminisced about the good old times he had with his departed "son", Philemon Masinga.
Sport
3 years ago
Next Article