There's nothing left for Sundowns in PSL – Mngqithi 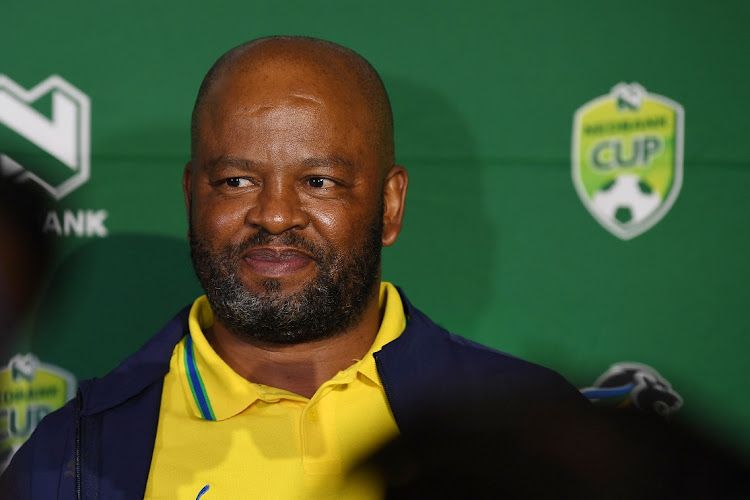 As they've proven they're peerless on the domestic front, Mamelodi Sundowns co-coach Manqoba Mngqithi has said they are looking beyond being local heavyweights, aiming to match the continent’s giants.

Mngqithi wants Sundowns to be at the same level with Al Ahly, Wydad Casablanca and Zamalek and he feels they are assembling a team that would close that gap in the future.

This after they strengthened the team with Teboho Mokoena, Bradley Ralani and South American player Erwin Saavedra in the recent transfer window.

“What many people fail to understand is that when we reinforce the team, it is not because we are looking in the PSL,” Mngqithi explained to the media during the Nedbank Cup launch on Tuesday.

“We are looking at our competitors and we are still far behind them in terms of the market value of the players that we bring in.

“We are competing with Al Ahly, Wydad and Zamalek and all these teams in terms of their value and what they bring into the game, make us look like underdogs.

“We have to fight in that space and make sure that we take ourselves to a level that we all believe Sundowns are capable of.”

The 50-year-old emphasised that they are not trying to show off every time they make a big signing.

“At times people think when we sign players for a show off,” he said.

“We are trying to prepare a team that we think based on the challenges that we have seen in the Champions League, we have a bigger responsibility to make sure that we have a team that can compete and represent the country in the bigger scale of things.”

Mngqithi also gave an update on Gaston Sirino, who has found game time hard to come by this season.

“The club doesn’t have a problem letting anyone go, he is a very important player. He is a very good player and he is showing all the signs that he wants to get back and play now. I believe he is going to come back stronger."

Orlando Pirates mentor Mandla Ncikazi says he would have loved to bolster the squad during the January transfer period, insinuating the club's ...
Sport
6 months ago

Former Kaizer Chiefs winger Junior Khanye revealed during a Diageo held at Konka in Pimville, Soweto, yesterday that he has been in 15 accidents in ...
Sport
6 months ago

McCarthy on Sithebe and Chiefs issue: 'You don't want to get bitten on the backside'

Benni McCarthy has taken a more circumspect approach than his AmaZulu chair Sandile Zungu regarding Siyethemba Sithebe reportedly signing a ...
Sport
6 months ago

Baxter concedes Chiefs will always lose out to Downs

Kaizer Chiefs coach Stuart Baxter has admitted "one team having all the trump cards" in the transfer market means Kaizer Chiefs have to be more ...
Sport
6 months ago
Next Article