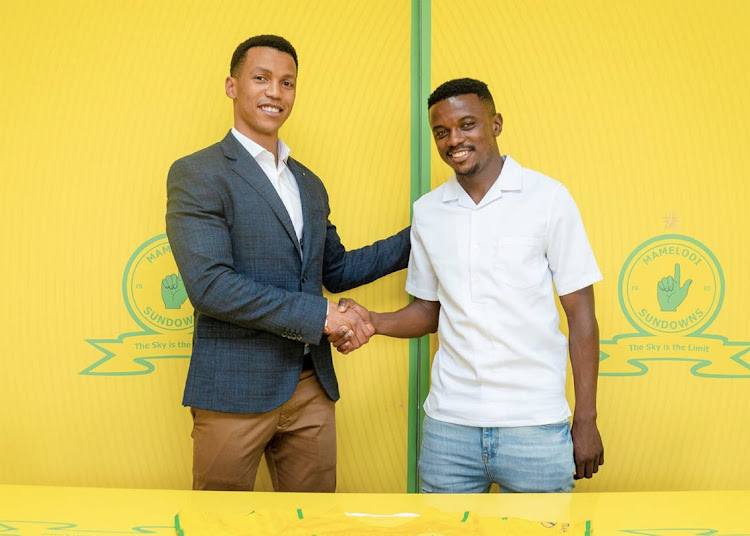 Mokoena completed his move from crosstown rivals SuperSport United on Thursday, signing a four-and-half-year deal. He becomes the second player from SuperSport to join Sundowns this season after Grant Kekana made the switch at the beginning of the campaign.

The midfielder says he can’t wait to lift what will be his first DStv Premiership title should Sundowns go all the way and win it again this season.

“I was born a winner and I want to see myself winning the league, competing in the CAF Champions League as well as the Fifa Club World Cup and just winning trophies,” Mokoena told Sundowns' official website.

“I want to take this time to show appreciation. I am very proud of this achievement and I’m also happy with the decision that I made to join Sundowns.”

While it was believed that Kaizer Chiefs were also interested in signing the midfielder, he said it was an easy decision to join the Brazilians who were serious about his signature.

“I am proud of this milestone in my career, to move from SuperSport to Sundowns,” he said.

“It was an easy decision for me to make because this club showed interest in me and it was also a club that I had hoped to play for.

“I like their style of play... how they are dominating the league and on the international stage as well.”

The 24-year-old netted 15 goals and made 17 assists in his 156 appearances for Matsatsantsa a Pitori.

SuperSport CEO Stan Matthews paid tribute to Mokoena and said that he will remain a special son to their club.

“Teboho has served our club with distinction since joining us in his mid-teens,” Matthews said in a statement.

“He has helped us win four major trophies and has consistently delivered on and off the field of play, which is why our chairman Khulu Sibiya gave his blessing for this move.

“He has made us proud by representing SA from U-17 to the U-20 Olympic team and now Bafana Bafana. He was the PSL's young player of the year and is a fantastic role model for young players to follow in how to manage a professional career in sport.

“As a young man, he gave generously of his money and his time to the communities from where he grew. He will remain a special son of our club.”

Benchwarmer Khune has hope for action at Chiefs

AmaZulu chair Sandile Zungu has told Kaizer Chiefs-bound Siyethemba Sithebe that he will never wear the club jersey during his remaining five months ...
Sport
3 months ago

It had been nearly two years without being close to a football stadium, thanks to Covid-19 and the PSL’s continued ban on the media at their events, ...
Sport
3 months ago

Jabu Mahlangu has had a charge of fleeing the scene of the accident added to negligent and reckless driving regarding the crash involving the BMW he ...
Sport
3 months ago
Next Article