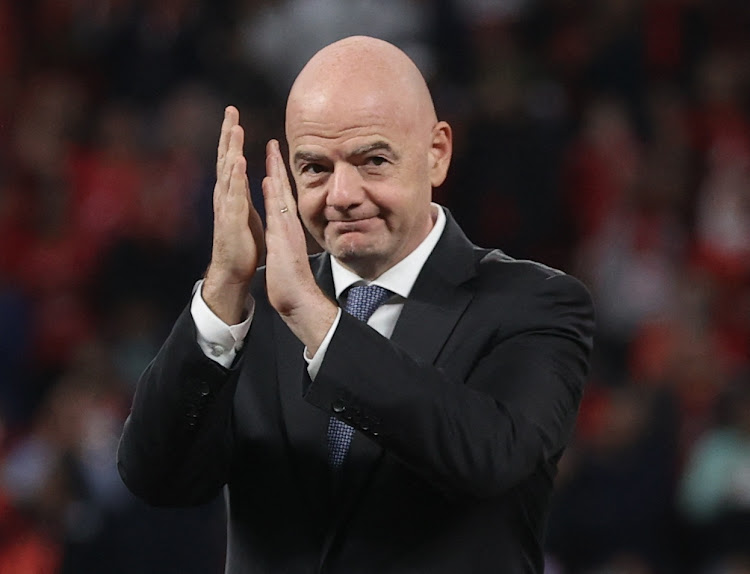 Fifa president Gianni Infantino has proposed the World Cup be played every two years instead of four, and Caf has backed him.
Image: REUTERS/Ibraheem Al Omari

Fifa president Gianni Infantino sparked criticism on Wednesday when he said increased revenues from a biennial World Cup could create opportunities for Africans who otherwise may find “death in the sea” crossing the Mediterranean.

He later said his address to the Council of Europe, the continent's leading human rights organisation, had been “misinterpreted” and that he meant that football could “help improve the situation of people around the world”. The idea of a World Cup every two years has been gathering steam with Infantino trying to get support from national federations, saying the switch would create an extra $4.4bn in revenues for the world body.

Fifa has said that the additional funds would help reduce the gap in revenues between the developed and less-developed football markets. In his speech, Infantino stressed the importance of making soccer more inclusive for countries outside Europe.

“This topic is not about whether we want a World Cup every two years, but about what do we want to do for the future of football,” Infantino said. “If we think about the rest of world and the vast majority of Europe, then we have to think about what football brings.  Football is about opportunity, about hope, about the national teams. We cannot say to the rest of world give us your money, but watch us on TV. We need to include them.

“We need to find ways to include the whole world to give hope to Africans so that they don't need to cross the Mediterranean to find maybe a better life but, more probably, death in the sea.”

Infantino added that the biennial World Cup might not be the answer to the migrant crisis. Infantino's comments were met with anger, with Ronan Evain, the executive director of Football Supporters Europe saying they were “disgusting” and that Infantino was unfit to run global football.

“My colleagues at Human Rights Watch (HRW) interview refugees around the world pretty much every day. They never mention the timing of World Cup tournaments,” HRW European media director Andrew Stroehlein said. Later on Wednesday, Infantino said his comments had been “misinterpreted”.

“In my speech, my more general message was that everyone in a decision-making position has a responsibility to help improve the situation of people around the world,” Infantino said. “If there are more opportunities available, including in Africa, but certainly not limited to that continent, this should allow people to take these opportunities in their own countries. This was a general comment.”

According to the UN-affiliated International Organisation for Migration, more than 1,315 people fleeing conflict and poverty in Africa and the Middle East died trying to cross the Mediterranean last year. During the same session, the Council of Europe backed Uefa to remain solely in charge of organising European football and said that it “firmly opposes the European Super League project”.

“It's 'No' to selfish super leagues and 'No' to extravagant World Cup proposals. But 'Yes Yes Yes' to working together to protect and strengthen our model that works in the interest of European football and society,” Uefa president Aleksander Ceferin said.

Form, flops and favourites: 5 things we learnt from the Afcon group stages

The group stages of the 2021 Africa Cup of Nations are behind us and the tournament hits its business as the knockout fixtures get under way on ...
Sport
3 months ago

Confederation of African Football president Patrice Motsepe has made an emergency dash to Cameroon as the country’s hosting of next month’s Africa ...
Sport
4 months ago