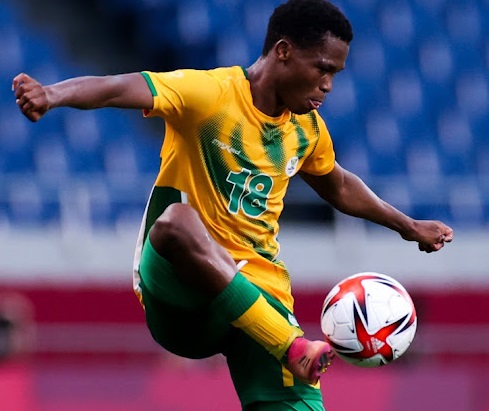 Even with recent signs showing he was closer to finally making his senior debut at Braga, talented attacker Kobamelo Kodisang could still move elsewhere this transfer window.

This is an indication given by Kodisang’s agent Mike Makaab. The 22-year-old Kodisang made the bench when Braga beat Arouca in the Portuguese top-flight tie late last month. This was a clear sign he was a step close to make his senior debut. However, he’s never made Braga’s match-day squad since then.

“At this moment, we are talking to Braga. We’re keeping our options open. The important thing is that he needs to advance in his career. We can’t run away from the fact that if he’s not going to be pulled in into the first team squad on a permanent basis, we must look for solutions elsewhere.

“No football club has inquired about him but we will know more about his future during the course of this week. He’s at an age where he must start playing regularly, hence we have prioritised him getting game time.’’

The lad from Seraleng near Rustenburg in the North West had a blistering 2020/21 season, netting six goals for Braga B team. Kodisang joined Braga on the back of a successful loan stint at third tier side Sanjoanense in 2019. It was the now defunct Bidvest Wits who had loaned the former Amajita ace to Sanjoanense.

During the single season, the 2019/20, that he spent at Sanjoanense, “KK”, as Kodisang is affectionately known in football, netted five goals in 24 appearances. This feat saw him being included in the Portuguese third-tier team of the season.

Kodisang is viewed by many as a future Bafana Bafana star, having played for all the junior national teams. He represented SA at both the Under-17 and the U-20 World Cups, before making it to the Olympics in Tokyo last year with the U-23 team.

Malawi's Gabadinho Mhango scored twice as they stunned southern African rivals Zimbabwe with a 2-1 victory in Group B at the Africa Cup of Nations to ...
Sport
4 months ago

Morocco booked a place in the last-16 of the Africa Cup of Nations while Gabon, Guinea and Senegal are also likely through but four-time champions ...
Sport
4 months ago

Despite enjoying an impressive run in the DStv Diski Challenge, Stellenbosch insist they are not thinking of winning the title yet.
Sport
4 months ago
Next Article