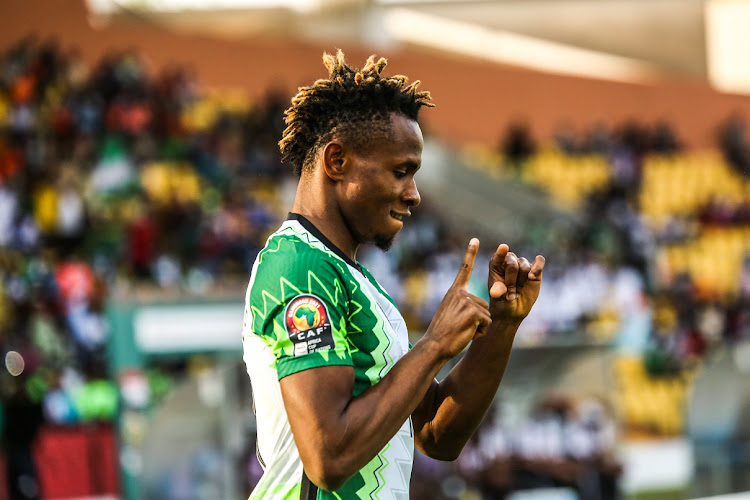 Samuel Chukwueze of Nigeria celebrates his goal in the 2021 Africa Cup of Nations match against Sudan at Stade Roumde Adjia in Garoua, Cameroon on January 15 2022.
Image: Tobi Adepoju/Gallo Images

Mohamed Salah scored his first goal in six matches for Egypt to give them a 1-0 victory over Guinea Bissau in Garoua on Saturday and their first points of the Africa Cup of Nations finals.

Salah's 69th-minute effort came despite a largely anonymous performance from the Egyptian forward as his team battled to beat the minnows from West Africa.

The result was clouded in controversy as Guinea Bissau had a late equaliser ruled out after a VAR check. Mama Balde thought he had scored with a screamer from a tight angle to level in the 82nd but the referee, after consulting the pitchside monitor, decided he had fouled a defender in the build-up to the goal.

It looked a harsh decision, leaving Guinea Bissau still without a goal in their last six finals matches stretching back to 2017 and now with slim hopes of progressing. They have one point.

“It was a tough game, we just did it at the end. We were a bit lucky with the foul,” said Salah.

Egypt needed the win after losing their opening Group D game against Nigeria, provoking loud criticism from pundits and supporters back home.

CAF should bar ref who brought shame to Afcon

For an organisation that frequently comes under attack, sometimes unfairly, the Confederation of African Football (CAF) has a worrying habit of ...
Sport
4 months ago

Salah struck the outside of the post in the second minute suggesting it might be a one-sided affair against a team 61 places below them in the Fifa rankings, but the closest Egypt came after that in the first half was when Mostafa Mohamed also hit his shot against the upright.

After Salah's goal, Ahmed Zizo struck the post again but Guinea Bissau showed little regarded for the seven-time African champions with Balde put the ball in the net from a tight angle. But he was adjudged to have pulled back fullback Omar Kamal as he battled to get into a scoring position.

“We just needed to win the game to concentrate on going as far as we can in the tournament. As you can see, it's a very hard tournament, it's going to be tough but we'll do our best,” added Salah.

Egypt finish the opening round against Sudan in Yaounde next Wednesday while Guinea Bissau take on group leaders Nigeria in Garoua at the same time.

Earlier Nigeria recorded a comfortable win over Sudan to stay top of Group D, ensuring that they progress to the knockout phase with a second successive victory.

An early goal from Samuel Chukwueze provided a positive start and Taiwo Awoniyi netted their second on the stroke of halftime. It took Moses Simon just 30 seconds of the second half to add a third, but Sudan pulled a goal back with a fortuitous penalty, converted by Walieldin Khedr with 20 minutes left.

Nigeria now have six points from their opening two games, after beating Egypt on Tuesday, while Sudan have one point.