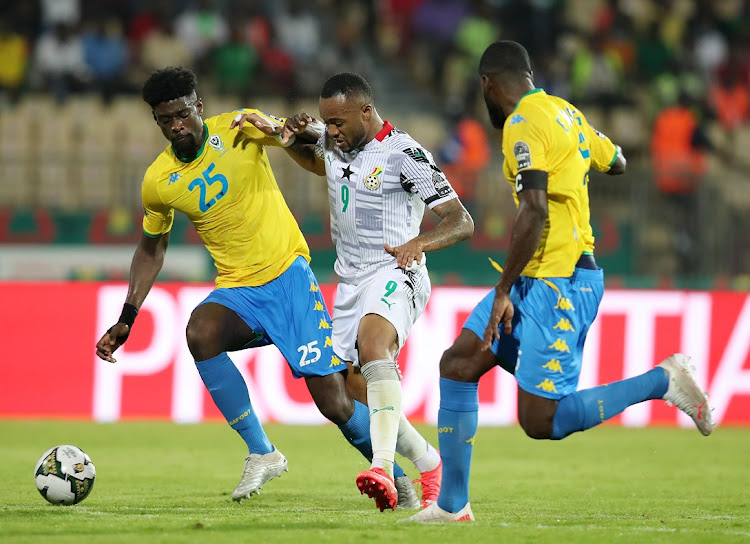 Jordan Ayew of Ghana is challenged by Junior Akue Assoumou Ecuele Manga of Gabon in the 2021 Africa Cup of Nations match at Ahmadou Ahidjo Stadium in Yaounde, Cameroon on January 14 2022.
Image: Muzi Ntombela/BackpagePix

Morocco booked a place in the last-16 of the Africa Cup of Nations while Gabon, Guinea and Senegal are also likely through but four-time champions Ghana are in danger of early elimination after Friday’s four matches at the tournament in Cameroon.

Morocco beat the Comoros Islands 2-0 for a second win and top place in Group C on six points followed by Gabon on four after they scored a late equaliser to hold Ghana 1-1 in the second game played in Yaounde.

Jim Allevinah’s 88th-minute strike is almost sure to see Gabon through, if not as one of the top two in the group then as one of the four best third-placed finishers in the six groups.

But Ghana are in danger on one point and must beat Comoros in their final group game in Garoua on Tuesday to stand any chance of advancing as they seek their first title in 40 years.

The match ended in an unsavoury punch-up after being littered with niggling fouls with Ghana’s Benjamin Tetteh sent off for a wild punch thrown in the post-match fracas.

Gabon’s point was wildly celebrated by their camp and made even sweeter by the Confederation of African Football's (Caf) refusal before the match to let their captain Pierre-Emerick Aubameyang take part, even though he was training on the eve of the clash after being released from Covid-19 quarantine.

“According to the Caf medical commission, the players Pierre Emerick Aubameyang, Axel Meye and Mario Lemina, barely out of Covid isolation, cannot take part in this match. Medical examinations show cardiac lesions and Caf did not want to take any risks,” the Gabon Football Federation tweeted.

Earlier in Bafoussam, Guinea and Senegal played out a 0-0 draw to stay neck-and-neck at the top of Group B on four points. Senegal coach Aliou Cisse said afterwards he had to remove midfielder Papa Gueye from the starting line-up on Fifa orders.

“Pape Gueye had an administrative problem just before the match kicked off. Five minutes before, we were notified that Fifa suspended him over a transfer between his club, Marseille, and Watford,” Cisse said.

“His lawyer informed us this morning around 11am, but just before the meeting we had the confirmation. That's why we removed him from the match sheet.”

Senegal were already without 10 players in Covid-19 isolation and their depleted resources showed in an underwhelming performance.

Frank Mhango scored twice as Malawi came from behind to beat Zimbabwe 2-1 in the other Group B game and also put themselves in line for a place in the last-16.

On Saturday, Nigeria take on Sudan and Egypt face Guinea Bissau in Group D in Garoua.

The Africa Cup of Nations descended into farce on Wednesday as Mali beat Tunisia 1-0 in a match prematurely halted by the referee, who later tried to ...
Sport
4 months ago

Aubameyang out of quarantine and ready to play

Gabon's Pierre-Emerick Aubameyang returned to training yesterday following the end of his Covid-19 quarantine ahead of their second game at the ...
Sport
4 months ago

Watford midfielder Ismaila Sarr could yet be able to play for Senegal in the Africa Cup of Nations finals after a 'positive development' in medical ...
Sport
4 months ago
Next Article