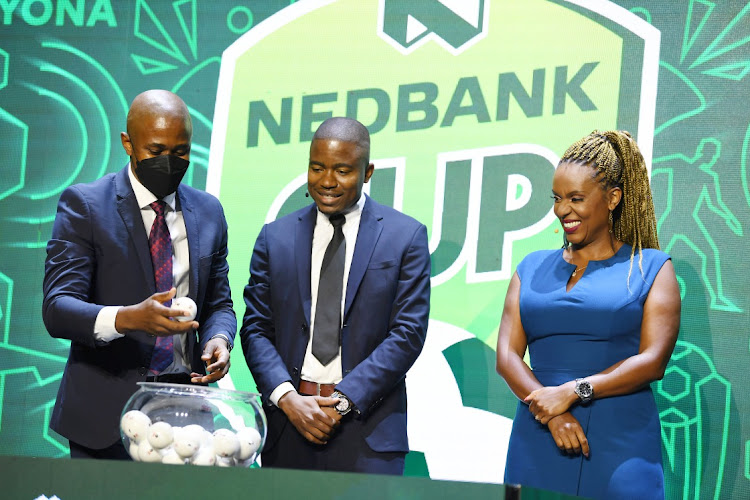 Thami Khuzwayo and Fhatuwani Mpfuni of the PSL and Nedbank Group Marketing and Corporate Affairs. Khensani Nobanda during the Nedbank Cup round of 32 draw.
Image: Lefty Shivambu

Sekhukhune United mentor McDonald Makhubedu has given the sense that he would have preferred to face a top-flight side in the first round of the Nedbank Cup rather than a lower-league outfit.

Sekhukhune were pitted against second-tier side Platinum City Rovers at yesterday's draw in Sandton.

“They’re a closed book to us and they know us better. So it’s not going to be an easy game but we’ll prepare the same way we prepare for league games. We will give them respect,” said Makhubedu.

While he was still building his profile as a coach, Makhubedu faced Premiership sides at lower division teams in the Ke Yona Cup. In 2017, his third-tier side Acornbush lost 2-1 to Kaizer Chiefs in the first round of this tournament.

“When you talk about teams from lower leagues, I know what they’re capable of because I was there before coming to the Premiership. I coached in the Motsepe League and in the NFD, playing against Premiership teams. I know that City Rovers will be more motivated,” said the Babina Noko coach.

Meanwhile, SuperSport United’s Kaitano Tembo also reacted to his side being drawn away to elite league foes Maritzburg United in the last-32 of the Ke Yona Cup. The Matsatsantsa coach expects a difficult clash, having failed to advance to the last-16 in the past two seasons.

“Playing against Maritzburg in the Nedbank Cup will be very difficult, considering that our first game from the break on February 15 is against them. Looking at our past results in the past two seasons in the Nedbank Cup, we haven’t gone pass the first round,” said Tembo.

“We want to change that. We will try and go all out because this is the only cup left for us that we feel we have an opportunity to fight for.”

New Premier Soccer League (PSL) prosecutor Zola Majavu has cracked the whip on Kaizer Chiefs, charging them after they didn't pitch for the games ...
Sport
5 days ago

For Nkosingiphile Gumede, reclaiming the No.1 jersey from highly-rated Sifiso Mlungwana at Golden Arrows doesn’t mean he’s now an outright ...
Sport
6 days ago
Next Article