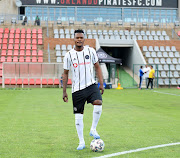 Orlando Pirates midfielder Nkanyiso Zungu’s agent Mike Makaab has opened up about the player’s possible exit from the Buccaneers.

AmaZulu and Stellenbosch are believed to be interested in the player, who made only two appearances under co-coaches Mandla Ncikazi and Fadlu Davids this season.

Makaab feels it would be good for both parties if the 25-year-old is allowed to go and join other teams to get game time.

“We are looking at all possibilities for him; yes, we obviously have to get the blessings from Orlando Pirates regarding that,” Makaab explained to Sowetan yesterday.

“I believe that if they don’t have plans to use him for the second half of the season, then they will look at some form of a deal so that he could get game-time elsewhere.

“It will be good for all parties. [At the moment] I’m waiting for Pirates, but listen, we have to do something before the window [closes] based on how the coaching staff is contributing in the next four or five months.”

Last season, Stellies were interest to have Zungu back on loan as he continues to struggle for game time. But Makaab insists there is nothing official from them yet.

Zungu started his career at AmaZulu as a youth development player and was promoted to the first team in 2015. He was then loaned to Jomo Cosmos in 2018, which was then followed by a move to Stellenbosch the same year.

He arrived at Pirates two years ago with a big reputation following his sterling performances for Stellies which saw the Buccaneers gun for his services.

But since arriving from Stellies, Zungu has struggled to establish himself in the Pirates' starting line-up and has fallen down the pecking order behind Ben Motshwari, Thabang Monare, Fortune Makaringe, Goodman Mosele, and Abel Mabaso.

His chances of getting regular game time under Ncikazi and Davids appear bleak. This is after Ncikazi told the media last month that the midfielder faces stiff competition in the Pirates midfield.