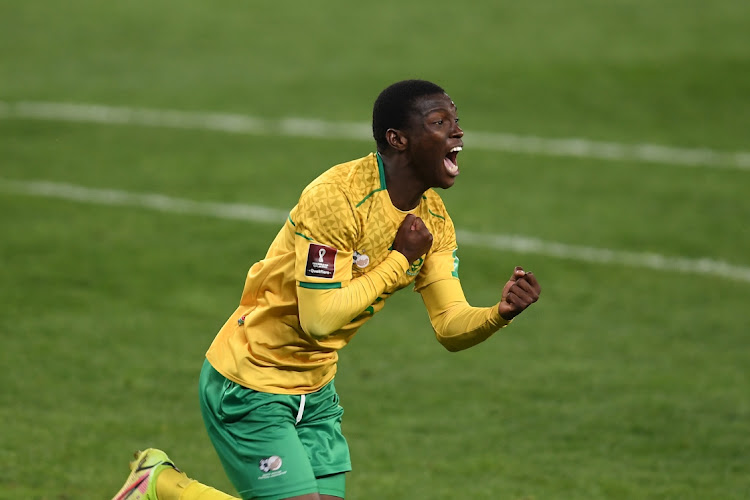 Bafana Bafana gem Bongokuhle Hlongwane’s ambition is to use his stay at Major League Soccer (MLS) outfit Minnesota United as a ladder to Europe.

Hlongwane completed his transfer from Maritzburg United to the American side on Wednesday, inking a three-year deal. The lad from Pietermaritzburg intends to utilise MLS as a stepping stone to even greener pastures in Europe.

“I want to use this opportunity to get to Europe, that’s my aim. However, I will put all my focus on my team without thinking too ahead of myself. I don’t want to lie; I am very happy to have earned this move. It’s a dream come true for me. It’s been always my dream to play abroad,” Hlongwane told Sowetan yesterday.

The 21-year-old right-winger-cum striker has been an integral part of Bafana coach Hugo Broos’ new-look side in recent months. While some feel moving to America may jeopardise his chances of playing for the national side, Hlongwane is confident he’ll keep his spot in Broos’ team.

“I don’t think playing in America will be detrimental to my Bafana career. The most important thing for me is to do well at my new team. By doing so, I am confident I will keep my place at the national team,” noted Hlongwane, who boasts two strikes from six Bafana appearances.

Minnesota coach Adrian Heath couldn’t stop raving about Hlongwane’s traits, highlighting Broos told them that more is yet to come from the skillful winger. Heath added they’ll give Hlongwane enough time to develop.

“He’s got huge upside, he’s now broken into the South African national team, and we’ve spoken to his national team coach [Broos], and he says it’s only the tip of the iceberg for what’s to come,” said Heath on the side’s website.

“He will be a work in progress for the club but his physical attributes, raw talent and football intelligence are impressive. We’re pleased to sign him, we know there was competition to get him, and so we are pleased he’s a Loon.”

Minnesota United is based in the state capital Saint Paul and it plays in the Western Conference of the MLS, where it finished fifth last season.

Maritzburg United chairperson Farook Kadodia has confirmed he has had interest from European clubs in Bafana Bafana starlet Bongokuhle Hlongwane.
News
4 months ago

Bafana Bafana failed in their two major assignments in 2021, which were to qualify for the Africa Cup of Nations finals in Cameroon and advance to ...
Sport
4 months ago
Next Article