WATCH AND IN PICTURES | Biden, Beckham, Bezuidenhout: Tutu and the 2010 World Cup 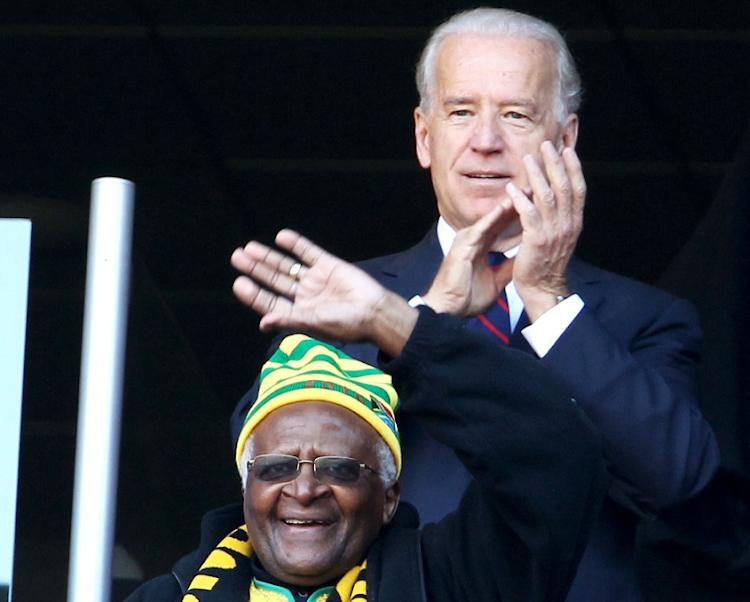 Archbishop Emeritus Desmond Tutu, who died aged 90 on Sunday, was a charismatic figure warming South Africans' spirits in a freezing cold winter of 2010, and revving them up on the eve of the hosting of the Fifa World Cup.

But the struggle icon's influence on the first staging in Africa of the world's greatest sporting event was so much more than his characteristically energetic speech at the kickoff concert at Orlando Stadium on June 10, the night before Bafana Bafana's tournament-opening 1-1 draw against Mexico.

Archbishop Emeritus Desmond Tutu speaks at the pre-tournament concert for the 2010 Fifa World Cup at Orlando Stadium on June 10 2010.

Tutu and former president Nelson Mandela were in Zurich on May 15 2004, and celebrated on stage at the World Trade Center when SA won the bid to host the tournament. The influence of SA's two Nobel Laureates campaigning in the years before that on the bid success was acknowledged by then Fifa president Sepp Blatter when he said of Mandela, presenting the trophy to the ex-president: “You are the true architect of this Fifa World Cup; your presence and commitment made it happen.”

Mandela and Tutu played a crucial role convincing global leaders and football bosses that SA was a safe venue with the infrastructure to be able to host a football World Cup.

Mandela was 91 in the notably cold winter of 2010, and exceptionally frail and barely seen during the World Cup. His appearance in a wheelchair at the closing ceremony ahead of the Netherlands-Spain final was a surprise and brief exception. 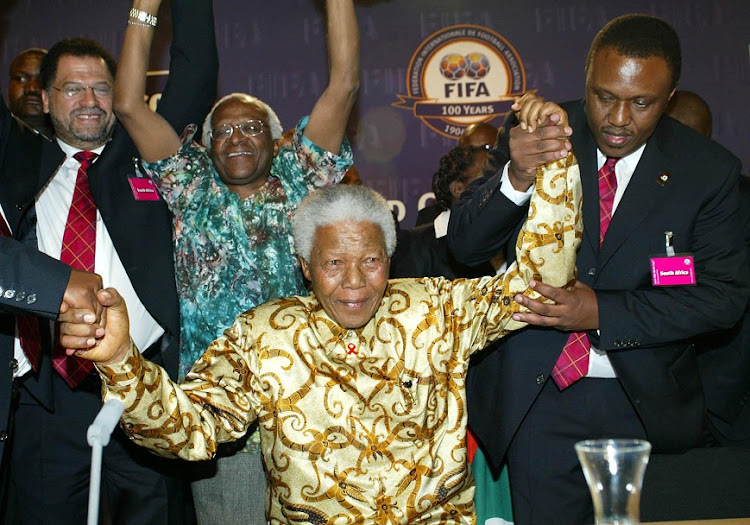 Tutu was a visible and energetic presence as SA opened its arms to the world for a heady month, where an atmosphere of enthusiasm, optimism and unity — misplaced or not — gripped the 16-year-old democracy.

A search in the archives of Gallo Images gives some sense of the busy month then 78-year-old Tutu had.

The day after the concert Tutu sat in front of then-US Vice President, now President, Joe Biden at Soccer City. He celebrated Siphiwe Tshabalala's opening goal of the tournament as Mexican President Felipe Calderon and SA President Jacob Zuma, who were seated next to each other, looked on.

On June 17 Tutu had tea with David Beckham at the Archbishop's offices in Milnerton, on the day before England's match against Algeria at Cape Town Stadium. The AC Milan superstar showed his support for the Desmond Tutu Peace Centre.

England had started with a 1-1 draw against the USA in Rustenburg on June 12, drew 0-0 against Algeria and scraped through Group B with a 1-0 win against Slovenia, before their 4-1 second-round humbling against Germany in Bloemfontein. 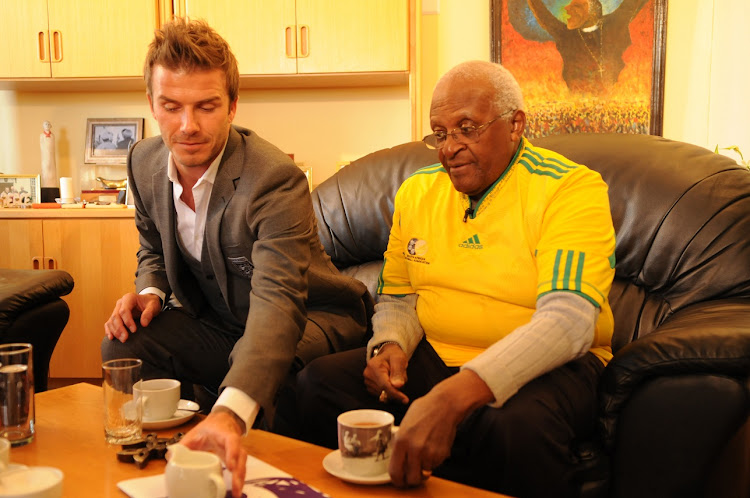 On June 21, five days after Bafana's demoralising 3-0 defeat to Uruguay at Loftus Versfeld and the day before they were to meet France at Free State Stadium needing a 4-0 win to progress past Group A, Tutu held a press conference in Cape Town. 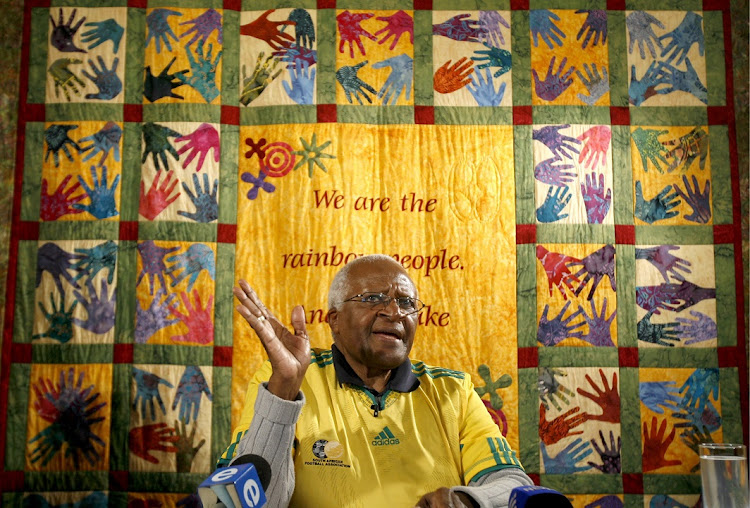 Archbishop Desmond Tutu addressing the media about the 2010 Fifa World Cup in a press conference in Cape Town on 21 June 2010. Tutu said he was overjoyed by the national unity and spirit of generosity that had developed in SA over the previous two weeks.
Image: Gallo Images/Foto24/Edrea Cloete

He said he was overjoyed by the national unity and spirit of generosity that had developed in SA over the first two weeks of the tournament, and that even if SA did not progress the country had a lot to be proud of. Bafana beat France 2-1 and were out of the World Cup. 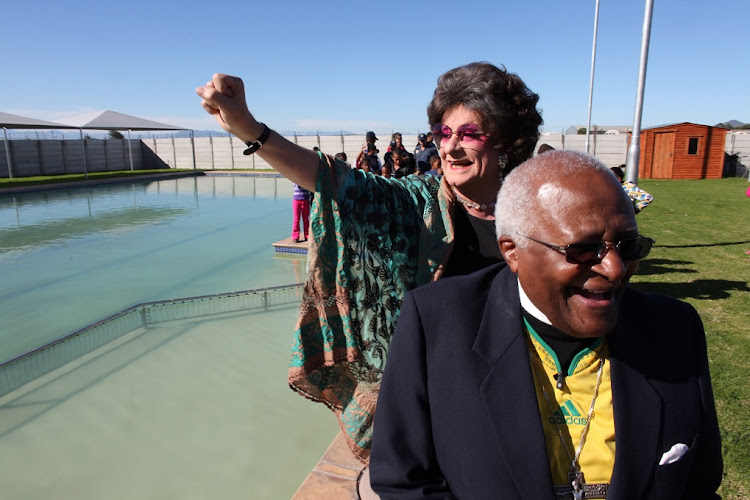 Archbishop Desmond Tutu visiting Darling in the Western Cape on June 23 20101 to view the town's new swimming pool and bless its Health, Sport and Education Centre. Evita Bezuidenhout accompanied him. The Archbishop was patron of the Darling Pool Project and The Darling Trust that was established in August 2003 by Tannie Evita's alter ego, the actor, Pieter-Dirk Uys.
Image: Gallo Images/Oryx Media Archive

On June 23 Tutu visited Darling in the Western Cape to view the town's new swimming pool and bless its Health, Sport and Education Centre, accompanied by Evita Bezuidenhout (Pieter-Dirk Uys). On July 2 he attended a roof wetting ceremony in Masiphumelele township in Cape Town, honouring the Kethuphila Youth Centre and launch of adolescent health services at a temporary clinic. The project was being funded by the Desmond Tutu HIV Foundation. 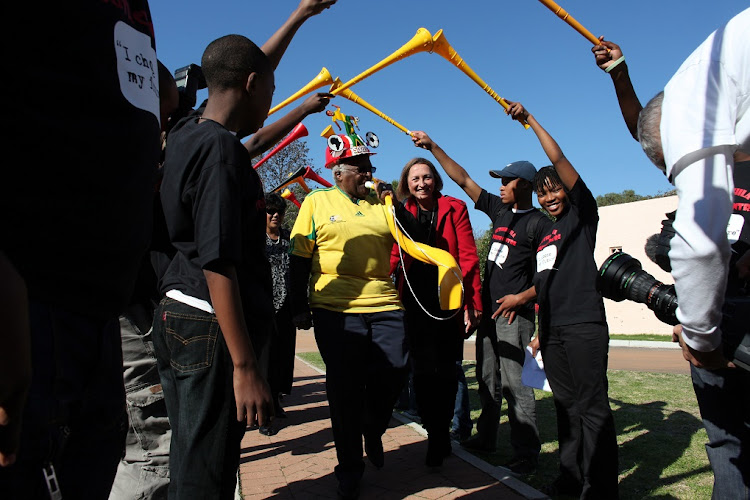 Archbishop Desmond Tutu attending a roof wetting ceremony in Masiphumelele, Cape Town. Wearing his Bafana Bafana outfit, with his makarapa, the Archbishop urged South Africans to welcome all foreigners to the country. The celebration honoured the Kethuphila ("Choose Life") Youth Centre and launch of adolescent health services at a temporary clinic on the site while the Kethuphila building was under construction. It was being funded by the Desmond Tutu HIV Foundation.
Image: Gallo Images/Oryx Media Archive

But it was Tutu's appearance at the pre-tournament concert — featuring acts including the Black Eyed Peas, Alicia Keys, Vusi Mahlasela and, of course, Shakira — that provided his enduring image of the tournament.

In an interview with NPR.org (America's National Public Radio) on June 23 2010, the New York-based Beninese star Angélique Kidjou told of how Tutu's words a few days before had moved her. Kidjou sang the classic Move On Up with John Legend at the concert. She said: “Curtis Mayfield wrote it for the African-American youth 40 years ago. John and I dedicated it to the African youth.”

Kidjou recounted: “Then came the most touching moment of my trip. After my performance, I sat next to Desmond Tutu on the side of the stage as he waited to make his speech. He told me, 'We just want to say we can do it. Yes we can, said [Barack] Obama. Now it's our turn to say we can. And we will!' 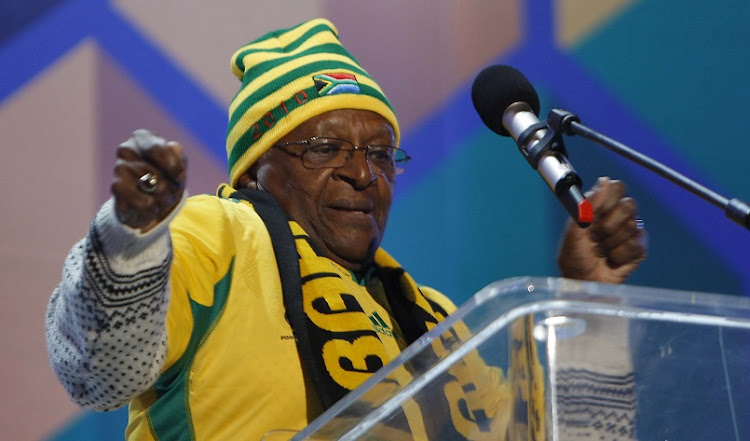 Archbishop Desmond Tutu attending the kick-off celebration concert at Orlando Stadium in Soweto on June 10 2010. The excitement for the Soccer World Cup overflowed as soccer and music lovers were entertained by some of the best local and international performing acts.
Image: Gallo Images/Foto24/Felix Dlangamandla

“The next day I couldn't help blowing my loud vuvuzela when SA scored first in the opening match. The first goal of the World Cup went to Africa. I took this as a good omen for my beloved continent.

“I know a sports event will not change the future of Africa in one day, but you have to agree, it is such a powerful symbol of hope. My continent is on the cover of The New York Times now, not because of conflicts and abuses, but because of joy and sport and excitement.

“Now I'm back in North America, and everywhere people ask me, 'How was it? How was SA?' Even though the African teams have not done so well since that first goal, I still have a big say. I'm so proud to have been the witness of this great moment for my continent.” 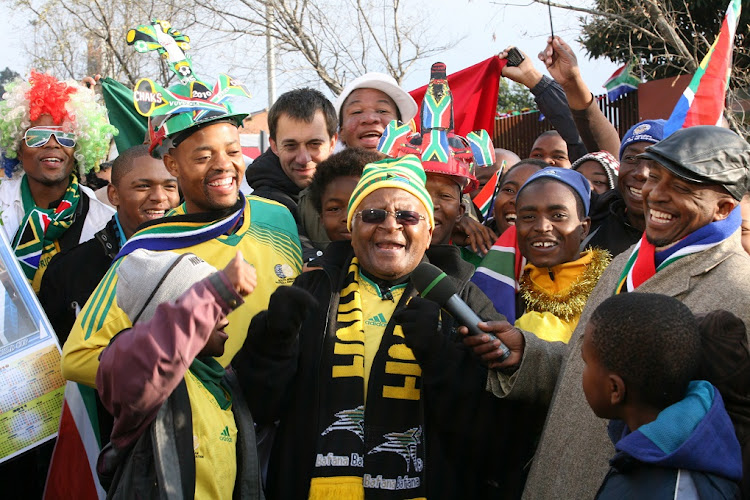 The optimism of the moment swept Tutu, too. On Monday July 12, the day after Spain edged Netherlands 1-0 in the final on that Sunday night, the archbishop said SA had outdone itself hosting the World Cup.

“We have bedazzled ourselves, and the world, with our warmth, efficiency, beauty and our promise. We have covered ourselves in glory,” he said.

“Never before have we experienced this overwhelming joy of unity in purpose. Congratulations are in order, and a lot of thinking about sustaining the positive mood and collective self-belief.”

Ten days later, on July 22 2010, Tutu retired from public life, saying in a nationally televised press conference: “I have done as much as I can and need time to do things I have really wanted to do. I do want a little more quiet.”

Tutu's body arrived at St George's Cathedral in Cape Town on Thursday, where the Archbishop Emeritus will lie in state on Thursday and Friday.

The body of Archbishop Emeritus Desmond Tutu arrived at St George's Cathedral in Cape Town on Thursday in a plain wooden coffin.
News
4 months ago

Tutu’s body escorted into cathedral by his daughter Thandeka

The body of Archbishop Emeritus Desmond Tutu arrived at St George's Cathedral in Cape Town on Thursday in a plain wooden coffin.
News
4 months ago

WATCH | ‘Let us honour our beloved father by emulating him’: Cape Town’s colourful send-off for Tutu

Tutu will lie in state for two days at St George's Cathedral as Cape Town gears up for the final farewell.
News
4 months ago
Next Article