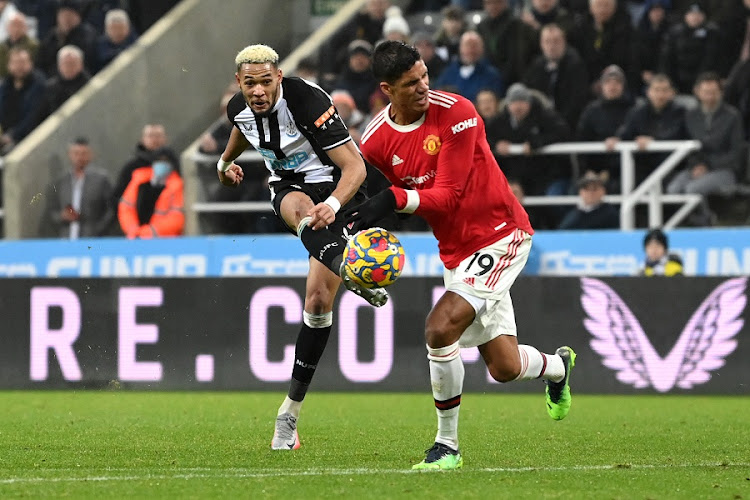 The ball hits the hand of Raphael Varane of Manchester United following a shot from Joelinton of Newcastle United in the Premier League match at St James' Park in Newcastle upon Tyne, England on December 27 2021.
Image: Stu Forster/Getty Images

Former Manchester United defender Gary Neville described the current side as “a bunch of whingebags” and singled out Cristiano Ronaldo and Bruno Fernandes for their attitude in Monday's 1-1 Premier League draw at Newcastle United.

The German manager was less than impressed with United's passive display, and Sky Sports pundit Neville also vented his ire at half time.

“They've not done one single thing right as a team, and not one single player can go in and say they've done their jobs, or even done themselves justice,” Neville said.

“They're whinging at each other ... a bunch of whingebags!”

Neville said after the game he was especially disappointed with Ronaldo and Fernandes.

“They're the two senior players. It's devastating for younger players when the two best players are looking at every other player like they're not good enough,” he said.

United, who host Burnley on Thursday, are seventh on 28 points.

Manchester United must make sure players are vaccinated — Rangnick

Manchester United manager Ralf Rangnick said the club had to ensure its players were vaccinated following a Covid-19 outbreak that led to the ...
Sport
5 months ago

Mahrez to captain Algeria at Africa Cup of Nations finals

Riyad Mahrez will captain Algeria as they defend their African Cup of Nations crown next month, named by coach Djamel Belmadi to lead his 28-man ...
Sport
5 months ago
Next Article