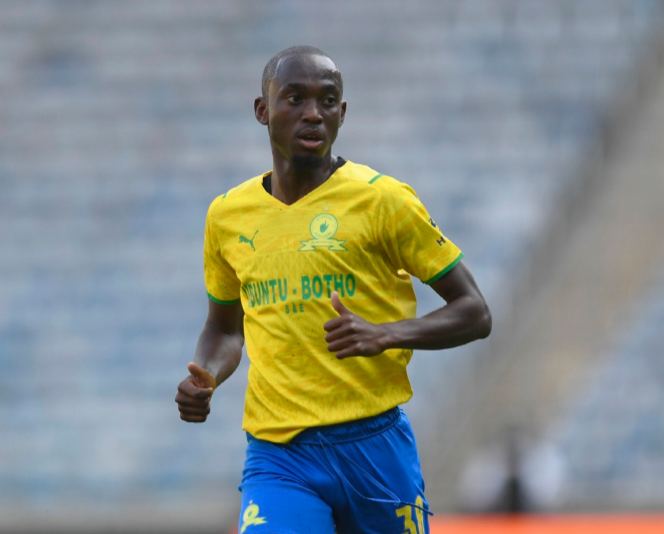 Mamelodi Sundowns attacker Peter Shalulile has received a huge endorsement from club scoring legend and former captain Daniel “Mambush” Mudau, who predicted he will score more than 20 goals this season.

Mudau said he has little doubt the Namibian hit-man will also break his long-standing all-time scoring record for the Brazilians of 110 goals in the Premier Soccer League (PSL) era if he stays longer at Chloorkop.

Mudau, who formed a devastating partnership with Nigerian Raphael Chukwu in the 2000s, scored 110 goals for Sundowns in the PSL era, but his overall tally sits at 170 and that mark will take some doing to be passed.

Since the establishment of the PSL in 1996, only Wilfred Mugeyi (Bush Bucks), Pollen Ndlanya (Kaizer Chiefs), Colins Mbesuma (Chiefs) and Siyabonga Nomvethe (Moroka Swallows) have scored 20 or more league goals in a season.

“I have been highly impressed with him (Shalulile),” said Mudau, acknowledging the Namibian is scoring at a phenomenal rate.

“If he continues at the rate he is scoring at the moment, he will definitely go on to score more than 20 goals this season. He is scoring at a very high rate and I don’t think I had scored so many goals for Sundowns at the same stage.”

Co-coach Rulani Mokwena has praised Mamelodi Sundowns' players for soldiering to their 60th match in a calendar year with the consistent appetite for ...
Sport
4 months ago

Shalulile scored 15 goals and contributed six assists, and was named the Footballer and DStv Premiership Player’s Player of the Season in his first campaign with the Brazilians last season.

He has shown he is not a one season wonder as he has already rifled 13 goals and three assists this season, and Mudau is confident the striker will reach the 20-goal mark during their remaining 11 league matches.

If Shalulile reaches the 20-goal mark he will be the first player in almost 10 years to have done so since Nomvethe in the 2010-11 season while playing for Moroka Swallows.

“He is a busy player who keeps defenders on their toes all the time. He will not only score 20 goals but I believe he will break my all-time scoring record at Sundowns if he stays at the club longer.

“He is a clinical finisher. The other thing I like about him is that he is a very disciplined athlete who takes his job seriously.”

Asked what makes Shalulile difficult for opposition defenders, Mudau said he is always sniffing around the edge or inside the box for opportunities and has a devastating eye for goals.

“Sometimes he runs away from defenders by going wide but when he gets an opportunity to score he will punish you. That’s what makes him a very dangerous player.

“I know sometimes he misses chances but as long as he is on that pitch there is a strong possibility he will get one chance and bury it.

“He is not your typical target man who sits in the box, like Raphael Chukwu or the late Philemon Masinga used to do. Sometimes he runs to the left or right and he also goes to the middle and he benefits from the supply from the likes of Themba Zwane, Neo Maema and other midfielders.”

Mudau said he would be happy if Shalulile broke his PSL record.

“Records are there to be broken and mine is going to be broken one day. I will be happy if he does it. I have always said records must not take too long to be broken because that shows people are not improving.”

Sundowns went to the Christmas break enjoying a huge 14-point lead in the DStv Premiership over second-placed Orlando Pirates, but Mudau, who captained the Brazilians to numerous championships, said the job is not yet done.

“It is early to predict who will win the league but they have accumulated enough points and they will be happy with what they have achieved so far at the halfway stage of the season.

“They have put themselves in the safe zone going into the second round of the campaign, which has the Nedbank Cup and the group stages of the Caf Champions League, which includes lots of travelling.

“We have vastly experienced coaches in Manqoba Mngqithi, Steve Komphela and Rulani Mokwena who will know better than anyone the job is not yet done and complacency will not be tolerated in the second round.”

Orlando Pirates would have hoped a knock to the head for Mamelodi Sundowns’ Peter Shalulile this week ruled him out of the DStv Premiership clash ...
Sport
5 months ago

Ndah injury unsettled Pirates in hammering by Sundowns, but 'that's no excuse'

Orlando Pirates co-coach Fadlu Davids said the injury to centreback Olisa Ndah coming back for the second half with the scores at 0-0 was disruptive ...
Sport
5 months ago

Mamelodi Sundowns have been built into their awe-inspiring current incarnation through continuity for the better part of a decade, said Orlando ...
Sport
5 months ago
Next Article