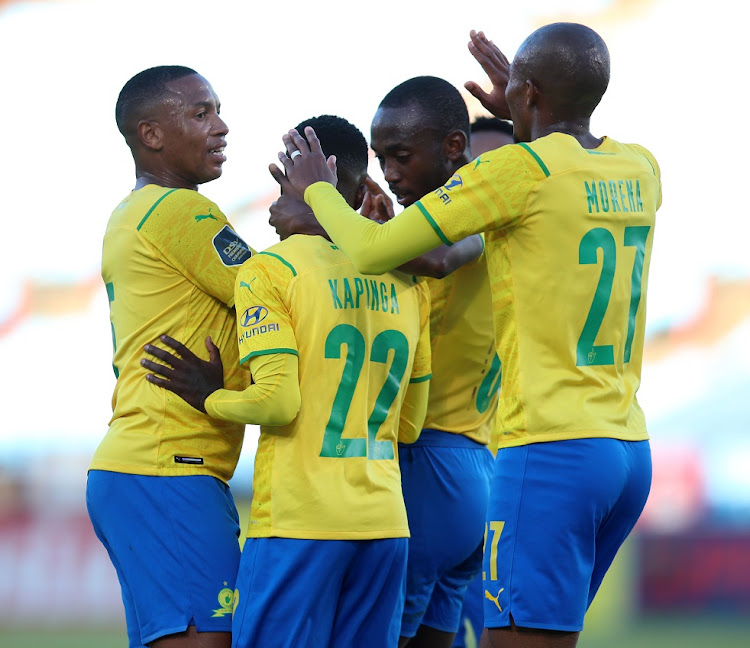 Lesedi Kapinga of Mamelodi Sundowns celebrates his goal with his teammates in the DStv Premiership match against Marumo Gallants at Loftus Versfeld in Pretoria on December 23 2021.
Image: Muzi Ntombela/BackPagePix/Gallo Images

Co-coach Rulani Mokwena has praised Mamelodi Sundowns' players for soldiering to their 60th match in a calendar year with the consistent hunger for success they have displayed in that period.

Downs could not win that 60th game, drawing the DStv Premiership clash 1-1 against Marumo Gallants at Loftus Versfeld on Thursday evening.

It said something of the trophy machine's hunger that, playing their seventh match in 20 days in a hectic run-in to the DStv Premiership's Christmas and Africa Cup of Nations Cup break, Mokwena still said his side battled to accept the result.

The Brazilians dropped five points in their last two games before the break, having lost their first outing in 29 matches 1-0 against AmaZulu on Monday. But they still take a 14-point lead into the recess.

“Since December 4 we've played seven games in 20 days with a lot of travelling to Stellenbosch, to Durban,” Mokwena said.

“So it's not easy for this team, and kudos to them for always representing this club very well.

“Even though we don't have confidence a bit — because after a defeat you are slightly shaken — it was a good response with regards to the performance.

“And I can easily say that we don't like the result, we don't accept the result, but we are happy with the performance.”

Given their schedule, it was no surprise Sundowns' coaching trio rotated to some extent against Gallants, with starts for Ricardo Goss in goal, Brian Onyango in defence and Lesedi Kapinga in the font-line.

“Apart from the seven games in 20 days, you are also talking about the team who have played the most matches in a calendar year — 60 matches.

“That's two league seasons in one year. It's incredible.

“And then you still have these incredible records of the goalkeepers keeping the most clean sheets, Peter tied for the most goals in a calendar year.

“So it's been a very difficult year for this team, but a year they've carried with aplomb, conviction and integrity.”

Shalulile scored his 13th goal of 2021-22 in Downs' 4-1 win against Orlando Pirates last Friday, taking him to 24 for 2021 and drawing level with Wilfred Mugeyi's record playing for Bush Bucks in 1997.

Sundowns return from the break against Chippa United at Loftus on Wednesday, February 16.

Orlando Pirates go into the DStv Premiership break in second place thanks to their 2-1 win against AmaZulu on Thursday night.
Sport
6 months ago

Orlando Pirates have notonly gone into the Christmas break in a morale-boosting second place, they have also shown enough signs in a far improved ...
Sport
6 months ago

Premiership leaders and champions Mamelodi Sundowns are not invincible after all and actually do have some frailties, it seems.
Sport
6 months ago

Kaizer Chiefs assistant coach Arthur Zwane does not think there's a need for the club to dip into the transfer market during the next window and is ...
Sport
6 months ago
Next Article