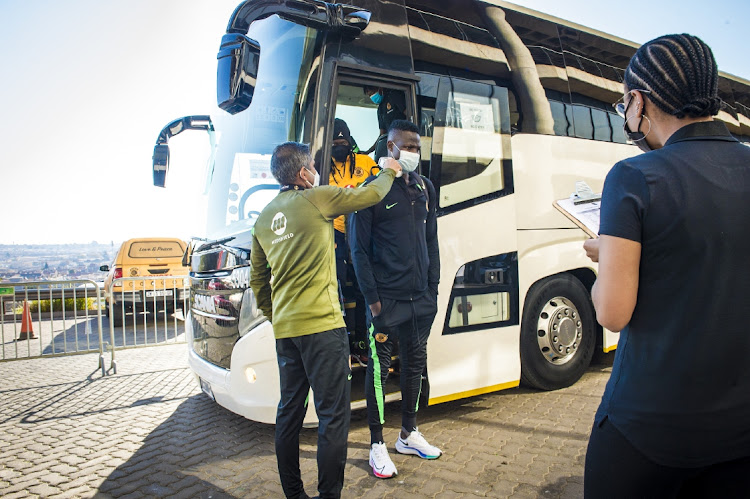 Kaizer Chiefs midfielder Anthony Akumu has his temperature gauged ahead of one of their recent DStv Premiership games. Covid-19 has hit up to 31 members of the club, forcing them to temporarily shut down operations at their Naturena base.
Image: Kaizer Chiefs Studio

The PSL executive meets today to deliberate on Kaizer Chiefs’ failure to honour a weekend fixture due to high Covid-19 cases in their camp, with expectations Amakhosi won’t be able to field a team for this week either.

After failing to host Cape Town City on Saturday, Chiefs were meant to travel to Golden Arrows on Wednesday, but team insiders told Sowetan yesterday no match would be possible as players must first retest before training can resume.

“We made it clear that our training base is closed due to having 31 cases. We don’t even have a technical team because everyone is in isolation. There’s no way we can play on Wednesday because for that to happen, we need to test again and allow the players to regain fitness after isolation,” a Chiefs insider said yesterday.

The PSL executive first deliberated on the issue on Friday, but could not reach consensus on how to manage a situation which could throw the entire DStv Premiership fixture list into disarray. A directive on the way forward is expected after today’s meeting, from which Chiefs owner Kaizer Motaung is expected to recuse himself as the request for postponement of five fixtures his team sent to the league last week will be discussed.

One of the options for the PSL would be to bring the entire programme to a halt for now, so as to avoid a heavy backlog for Chiefs, who have made it clear they would honour fixtures only once given the all-clear by medics.

PSL to discuss Kaizer Chiefs' request for postponement of matches

Kaizer Chiefs' request to the Premier Soccer League (PSL) to postpone the club's four league matches in December will be discussed at an executive ...
Sport
1 month ago

According to a SA Football Association (Safa) senior medical officer players need at least 10 days rest  before starting to train after recovering from Covid-19, meaning Chiefs will need even more time before they have their players back.

“After recovering (from Covid), you need to retest. Your test needs to be negative... then you need at least 10 days where you have to have no symptoms. From there, you can graduate to full training,’’ Ngwenya told Sowetan yesterday.

“We don’t recommend that you must play immediately after the 10 days. In the first week after recovery you do minimal activities; after three days you can increase your activities. We must always be careful because we are talking about the lives of people here.’’

Chiefs have also defended themselves from suggestions they field their reserve team to make up for the senior players recovering from the virus. “How do we do that when the entire (Chiefs) Village is locked? Where would these players train? Which dressing rooms would they use?” asked another Chiefs informant.

In January, the PSL rejected Cape Umoya’s request to have their game against Cape Town Spurs postponed due to a huge number of Covid-19 cases at the club. The league later gave Spurs a 3-0 walkover. This precedence could put Chiefs in trouble. It’s unclear if the PSL would do the same with Chiefs after City arrived at FNB Stadium on Saturday to find locked gates.