'Defensively we need to be very well structured and organised' 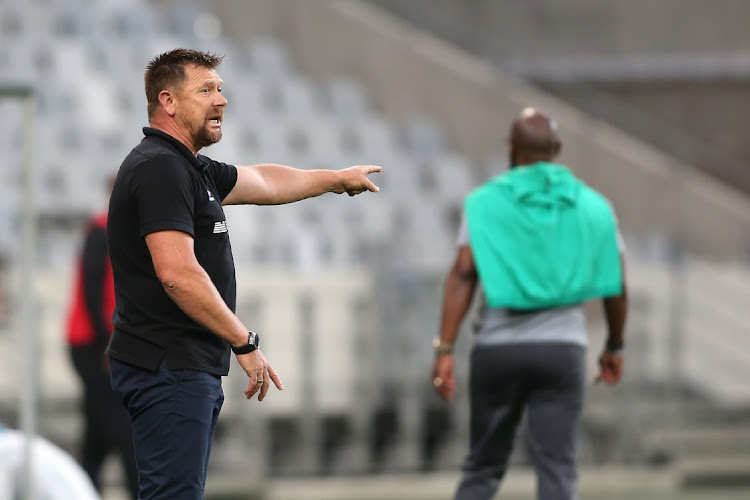 Cape Town City mentor Eric Tinkler has inculcated in his troops a culture of tidy defending heading into their league match against Kaizer Chiefs at FNB Stadium tomorrow (6pm).

Tinkler wants a clean sheet at all costs against the high-flying Chiefs. The City tactician is still deploring the way they defended against TS Galaxy in their last outing, where they led twice but eventually drew 2-2, last Saturday.

“We’ve managed to keep clean sheets against the best team in the league in Sundowns [they played out a goalless draw against the Brazilians three weeks ago] and now consistency becomes key, especially when you’re facing Chiefs where upfront they’ve a lot of firepower in [Khama] Billiat, [Keagan] Dolly, [Bernard] Parker and [Lebogang] Manyama,’’ said Tinkler yesterday.

“They [Chiefs] have a lot of players that can score goals, so defensively we need to be very well structured and organised. We’re hungry. We want to win things. We need to go to Chiefs organised structurally. I am disappointed at how we conceded the goals against Galaxy, so that’s an area we need to improve on against Chiefs.”

The City mentor wants his players to be brave tomorrow, admitting that they may have to sacrifice attractive football for the win.

“We’re playing an in-form Chiefs… they have had some positive results of late. As a coach, I don’t really need to motivate my players. My players should already be motivated, knowing that they’re playing against such a high-profile club as Chiefs,’’ said Tinkler.

“We have to go there and again play with no fear. We must play with a lot of belief. We are a team that likes to play attractive football, so we’d like to continue doing that but sometimes we have to play ugly football in order to collect maximum points and that is going to be the lesson this weekend for the players to understand the importance of improving defensively.’’

Being the first team to score against leaders Mamelodi Sundowns seems to have done wonders in lifting SuperSport United’s morale.
Sport
6 months ago

Marumo Gallants goalkeeper Washington Arubi has warned that they should not be written off yet as they are capable of overturning a 1-0 defeat they ...
Sport
6 months ago

Dladla not getting carried away with Bay's log position

Richards Bay may be one of the early pacesetters in the GladAfrica Championship, but coach Sipho Dladla remains on guard against thinking too far ...
Sport
6 months ago

Stellenbosch may have lost their past two matches but they are still capable of ending Mamelodi Sundowns' unbeaten run in the DStv Premiership.
Sport
6 months ago
Next Article