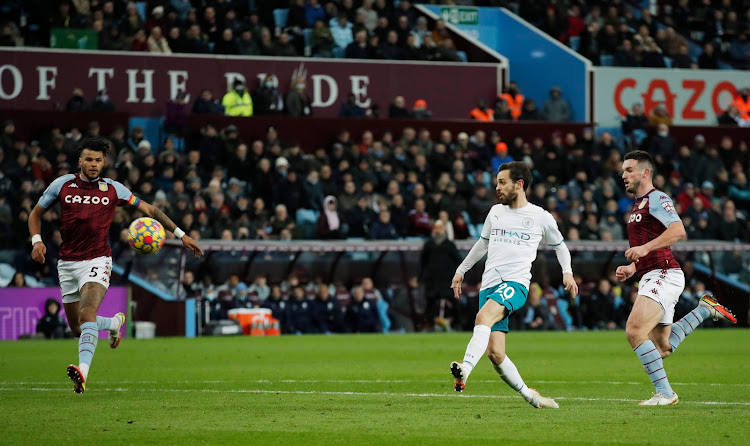 Pep Guardiola's Manchester City side will not be taking their foot off the gas in the Premier League title race after a hard-fought 2-1 win against Aston Villa left them breathing down the necks of leaders Chelsea.

"So we are going to face the challenge," Guardiola told Amazon Prime of their bid to retain their title as City stayed a point behind Chelsea thanks to brilliant goals from Portuguese compatriots Ruben Dias and Bernardo Silva.

Guardiola, who celebrated his 150th Premier League win with City in 204 games, praised his side as they held off a spirited Villa fightback in the second half after Ollie Watkins pulled one back for the home side.

He also praised the scorers and added he hoped to have several injured regulars back in the fold quickly.

"The game we played was fantastic," Guardiola said.

"Difficult game. We knew it. I understand why. Especially after conceding early in the second half, the way we reacted... we played really well.

"He (Silva) scored a fantastic goal. He is a player on another level. Ruben has good personalities and he scored a good goal."

"Hopefully they (the injured players) come back soon.

"The doctor came to me and said 'this guy, this guy and this guy can't travel' so I say 'OK. Bring players from the academy and we go with them.'"

Guardiola's counterpart Steven Gerrard applauded Villa's effort and conceded his team's were overawed by City's superior display in the opening half.

"The second-half performance was really good," Gerrard told the BBC.

"It maybe deserved that we take something from the game.

"We lacked a bit of belief at the start of the first half.

"That is a combination of them having top players and manager.

"We got a foothold and then conceded. The second goal we could have stopped the game higher up the pitch. The reaction I got, I can't ask for more."