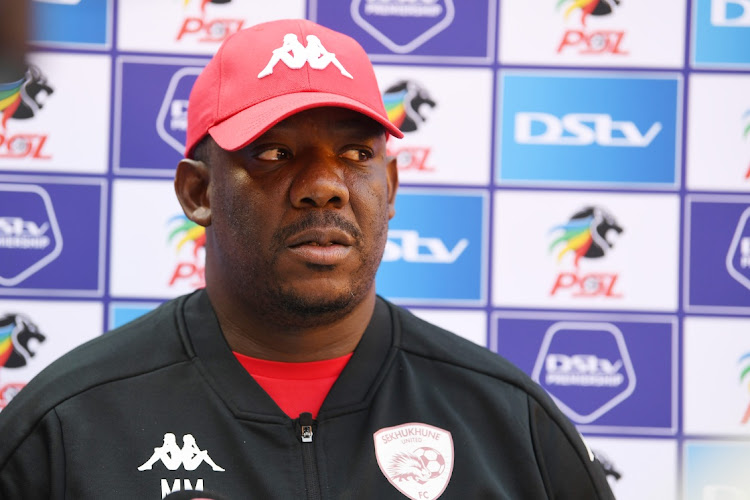 Despite losing to champions Mamelodi Sundowns in the DStv Premiership encounter at the Tuks Stadium at the weekend, Sekhukhune United coach MacDonald Makhubedu believes they will give many teams a tough time in the league this season.

Makhudedu praised his team for their character, and he is of the view that they are on the right track in their debut season in the Premiership.

A first-half goal by Neo Maema and a second-half penalty by Themba Zwanwe helped the Brazilians to a 2-0 victory against the rookies.

United wanted to be strong defensively and play on the counter-attack but it backfired when they conceded inside the opening 20 minutes.

Despite the loss, they are in a good position in third place on the log table with 20 points from 12 matches. Makhudedu is confident of a top-eight finish in the Premiership.

Peter Shalulile’s shot appeared to hit Nyiko Mobbed on the chest but the referee awarded Sundowns the penalty in the 59th minute.

However, the modest Makhudedu said to err was human, and he forgave the referee for the costly error that increased the advantage for the home side.

“We are targeting about 27 points in the first round. We will be safe if we can get 10 more points in the second round. We are on the right track, and we want to be in the top ten and top eight at the end of the season.”

Makhubedu signed about 18 new players and his team seems to have gelled fast,  and he played a couple of matches against Sundowns in the off-season. But they lost their first competitive game against the 10-time league champions at the weekend.

Makhubedu said he took lessons from the defeat, and they would trouble many teams in their league campaign.

“We are like family, and we work for each other. I have never seen my boys fight for unnecessary things, and they fight for the badge. We will cause many teams problems if we continue to play like this," added Makhubedu.

Brooks has to prove himself, says Ramovic

TS Galaxy coach Sead Ramovic has demanded more from Ethan Brooks, insisting the Bafana Bafana star must prove himself in order to be given more ...
Sport
7 months ago

AmaZulu are becoming this season’s draw specialist after playing to a 1-1 draw with Maritzburg United in the KwaZulu-Natal derby at Harry Gwala ...
Sport
7 months ago

Wheels are seemingly falling off for Stellenbosch, who were seen as one of the surprise packages just a few weeks ago, after suffering their second ...
Sport
7 months ago

Mamelodi Sundowns are not counting their chickens before they hatch in the DStv Premiership title race, according to their co-coach Rulani Mokwena.
Sport
7 months ago
Next Article